“When love comes it’s like a dream but when it goes it’s like a nightmare” Nkechi Blessing’s ex, Opeyemi Falegan breaks silence as he quits social media

The estranged lover of actress, Nkechi Blessing Sunday, Opeyemi David Falegan has broken his silence following his announcement of their break up.

The Ekiti state politician took to his Instagram page on Thursday, April 7th to announce he would be quitting social media for a while.

The politician who was dragged into the mud by his ex noted how love is always like a dream when it comes, but when it leaves it becomes a nightmare.

Opeyemi Falegan tendered an apology to the public for his outburst as he blamed it on persistent questioning by the media.

Taking to his Instagram page, he wrote, “I wanna apologize for my outburst yesterday due to the flame of the moment, some information were shared cos everyone wanted to look or sound right (appeal to pity or petito) either true or lies. Some bloggers contacted me and wanted to know if I was married or not and some informations were known yesterday, I wanna tell everyone that I will be leaving my social media till further notice, have decided to remain quiet as silence is golden. When love comes is always likes it dream but when it goes like a night mare. Goodluck everyone”

News recalls Opeyemi David had infuriated Nkechi Blessing when he announced to the world that he had broken up with the actress.

The politician went on Instagram live were he warned the public to stop attaching him to the actress as he doesn’t want his image or reputation to be spoilt.

He also claimed that the actress was a lesbian.

This had infuriated Nkechi Blessing to open a can of worms on her ex boyfriend.

The actress went on Instagram live on Wednesday night, April 6 were she broke down in tears as she spoke about her relationship.

Nkechi revealed that her husband is very broke and isn’t active on bed.

The actress claimed that she was the one feeding, clothing and paying all his bills.

According to the actress, she broke up with him because she was tired of using the little money she was making to feed him. 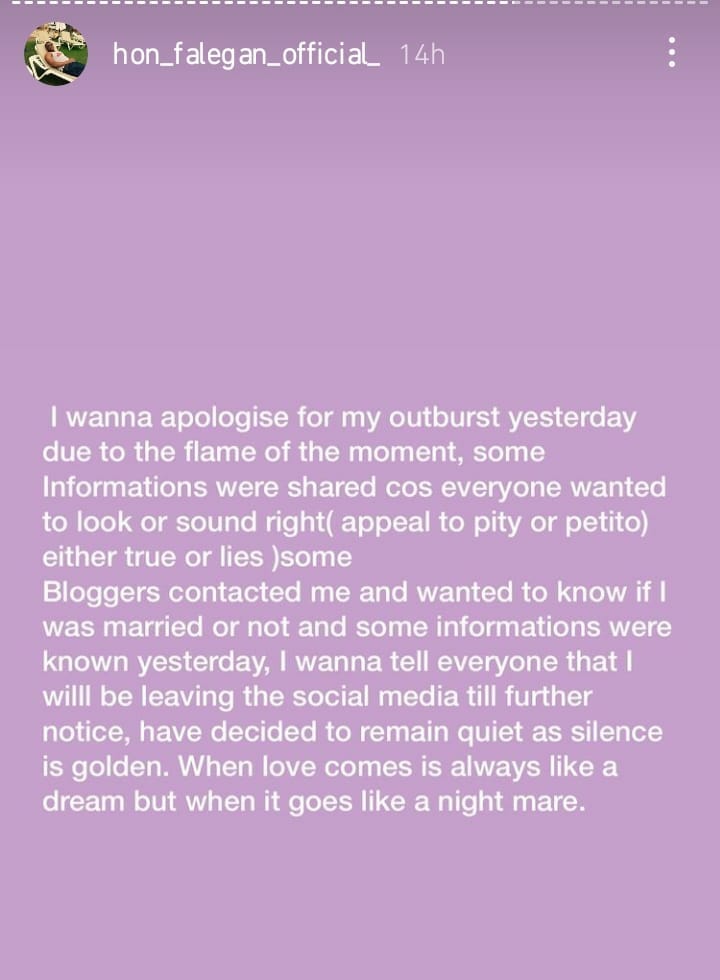 “When love comes it’s like a dream but when it goes it’s like a nightmare” Nkechi Blessing’s ex, Opeyemi Falegan breaks silence as he quits social media