Why I lied about my 30th birthday party holding in Paris Bobrisky confesses » Naijabulletin
BREAKING
Published on: September 21, 2021

Nigerian crossdresser Idris Okunneye popularly called Bobrisky has finally opened up on why he lied about his 30th birthday party holding in Paris.

News recalls that the Nigerian male barbie came under heavy criticism and was dragged after he held his birthday in Lagos.

Many social media users questioned Bobrisky when Lagos became a town in Paris, while others mocked him for always lying on social media.

Justifying his action, Bobrisky, in a post shared on his Instagram page, said he lied about his birthday party holding in Paris because he did not want uninvited guests to know the location.

READ ALSO:  “If you don’t use iPhone 12 don’t come close to me for pictures” – Bobrisky warns fans

Bobrisky applauded himself for being secretive about his birthday party‘s venue, adding he has learned enough lessons never to be predictable or give out so much information about himself.

He wrote: Many of you are dumb, I said my party was in Paris cos I don’t want many of you to know the location… period. I think I was secret enough about the venue, have learnt my lesson enough never to be predictable or giving so much info

READ ALSO:  ‘This is pure photoshop’, Nigerians continue to blast popular crossdresser Bobrisky after showing off his recently operated body in bikini 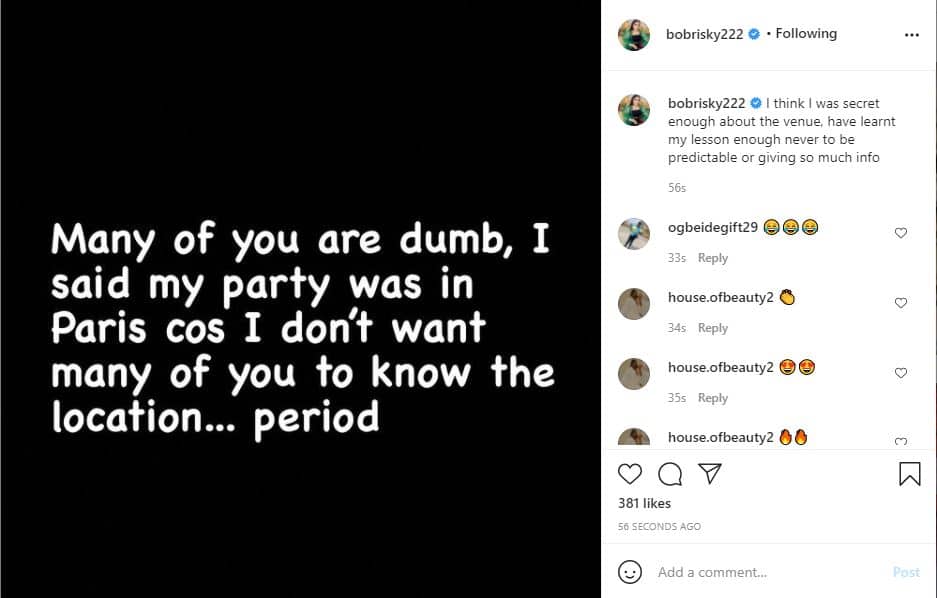 “Blessed are you among women” – Tonto Dikeh’s lover, Prince Kpokpogri celebrates her, she replies

VIDEO: Bobrisky rushed to the hospital due to complications from his cosmetic surgery