A post shared by Instagram blogger ‘The Eye Opener’ alleged that Titi Marshal, who used to be KWAM1’s favourite wife, suddenly became a thing of the past before the fuji singer because of her negative behaviour.

According to the report, Titi Marshal was so much of backbiting, charm, envy, jealousy, evil heart, lies, and the reason KWAM1 left her for Emmanuella Ropo.

The source alleged that Titi has been plotting people’s downfall and has been crying foul ever since the news of KWAM1 and his new lover broke out.

The blogger added that KWAM1 and Emmanuella Ropo had picked 18th November for their wedding, which will hold at the Alake of Egbalan in Ake, Ibadan.

The post reads: The Mayegun of Yorubaland and King of Fuji music, Wasiu Ayinde Marshal, popularly known and addressed as K1 has picked November 18, 2021 to wed his latest wife, Emmanuella Ropo.

Our source revealed that the arrangement was in top gear for yet another one in town wedding between the two lovebirds.

Nationalsketch was reliably told that the engagement and Nikkai would hold at the Palace of Alake of Egbaland in Ake, Abeokuta.

We gathered that K1 had earlier in September secretly did a family introduction with the family of Emmanuella Ropo, and few days later he granted an exclusive interview with City People Magazine.

An online news platform (The Elites) had also reported that K1 had gone to the Palace of Oba Saheed Elegushi, the Elegushi of Ikate land, Lagos, Kusenla 11 to introduce his new wife to the monarch and seek royal blessing.

According to those in the know, on hand to receive K1 and his new wife at the palace along with Oba Elegushi were his wife, Sekinat Elegushi, Akinsiku of Lagos, Oba Dosunmu and the Lagos State Commissioner for Home Affairs, Prince Anofiu Elegushi.

Emmanuella Ropo is the hardworking brain behind Party Dreams, an event and children’s gift outfit in Ojodu, Ikeja, Lagos.

Ropo is an Egba chief; she is the Otun Iyalode of Igbein in Abeokuta and her late dad, Chief Stephen Gboyega Odebiyi was a respected Egba chief too and he was a strong member of the Catholic fold in Abeokuta, Ogun State.
K1 was on the bandstand to entertain guests at funeral of Ropo’s father’s on June 27, 2021.

An insider informed us that K1 bought a N85million house for the woman in Lekki area of Lagos State.

Emmanuella Ropo, according to our findings, is a mother of three. It was however not clear, why Mayegun decided to tie the knot with the woman.

People now wonder what becomes of another wife of K1, Titi Masha, who the musician used to eulogise everywhere he went.

At a time, Titi Masha was talk of the town and she was highly paraded by King Wasiu Ayinde Marshal. Titi is also blessed with three kids for K1. It was not clear how Titi suddenly became a thing of the past before K1.

According to our informants, Titi was so much of backbiting, charm, envy, jealousy, evil heart, and lies, no wonder K1 left her for Emmanuella Ropo, alleged our source.

Titi was alleged to be plotting the downfall of people, and it was gathered that she has been crying foul ever since the story of the two lovebirds broke out.

However, Titi was not the first to come and go. Observers said that if ‘Aunty Shalewa’ could come as a wife of K1 and leave, who is Titi Masha.

We reliably gathered that Titi’s mother nearly gave up the ghost many years ago, when she heard that she was pregnant for K1.

Our source opined that Titi went to Ijebu Ode to beg Wasiu but her pleas fell on deaf ears as she allegedly came back in shame. 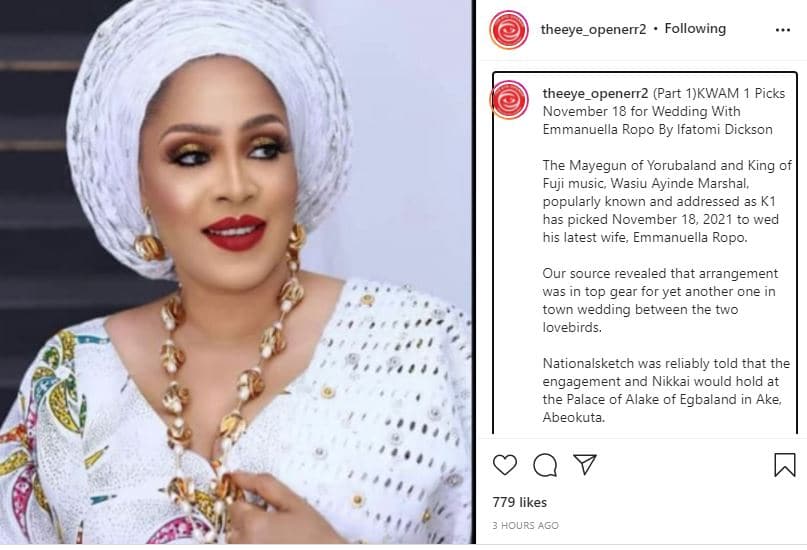 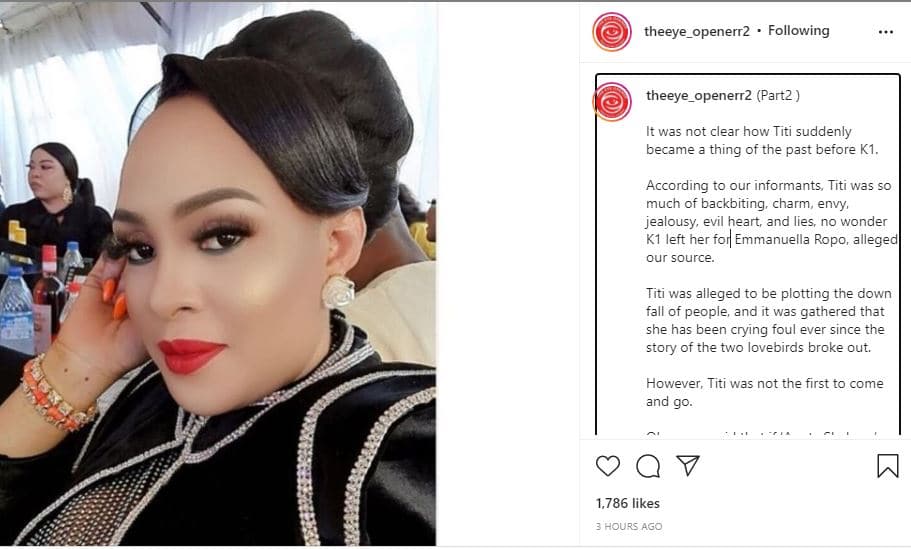 Why Kwam1 allegedly dumped his wife Titi for Emmanuella Ropo