Wizkid’s baby mama, Shola Ogudu, weighs in on the viral tape of a 10-year-old female student who engaged in an act with other male students.

This comes amidst the backlash trailing Chrisland School over a leaked tape of its female student who was supposedly raped.

According to Shola, she heard of the issue first from her son, Boluwatife Balogun, who claimed that some students circulated a video of the female student in question.

“It took me a lot of thinking before dropping this comment. The way we just throw the word ‘RAPE’ around so loosely without considering how much damage it can cause.

Firstly, as parents we need to pay close attention to our kids and what we expose them too, cos mahn it’s a crazy crazy world we live in.

Secondly, I accompanied my son to represent his school at the just concluded WSG and I can say for a fact that the 10 yr old in question was DEFINITELY not raped,” she said.

On her expression hearing about the issue from her son, Shola Ogudu stated, “I remember vividly the ‘SHOCK’ in my son’s face when he was telling me about a video some other kid was watching, he said Mum, I couldn’t stand the video I had to excuse myself, he said the gist circulating was that the girl and her click played a game of truth or dare, of which this particular girl couldn’t stop with the mind bugging’ DARES’ I couldn’t believe my ears when I learned about the nasty activities this lil kids get themselves involved in.

To make matters worse, even when she was accosted about the video, she was owing it with her full chest, saying yeah it’s me in the video and so.

Adding to her points, Wizkid’s baby mama emphasized on how troubling the case is.

In her words, “It bothered me so much, I needed to see this kids I question so I’ll know how to advice my child against such kids (well he knows better) before they use their reggae to spoil my blues. God Abeg.

But seeing this post now and the twist of it all, I just couldn’t take it ( cos I know for a fact how very very strict the teachers were on this trip) blaming such immorality and negligence on the school is unfair cos it DEFINITELY WASNT RAPE!!!

if ma’am, they were in a hotel where other schools also stayed at, To avoid stories that touch like this, they made sure the boys room was on the 10th floor and the girls room 2nd floor.

The teachers did their parade 3-5 times daily making sure they were all in their rooms.

Their were over 70kids to 5-6 teachers( this teachers went through hell trying to get them together) But for you to know how badly behaved this kids were, they waited till after mid night (after the last roll call) to get their nasty acts on. 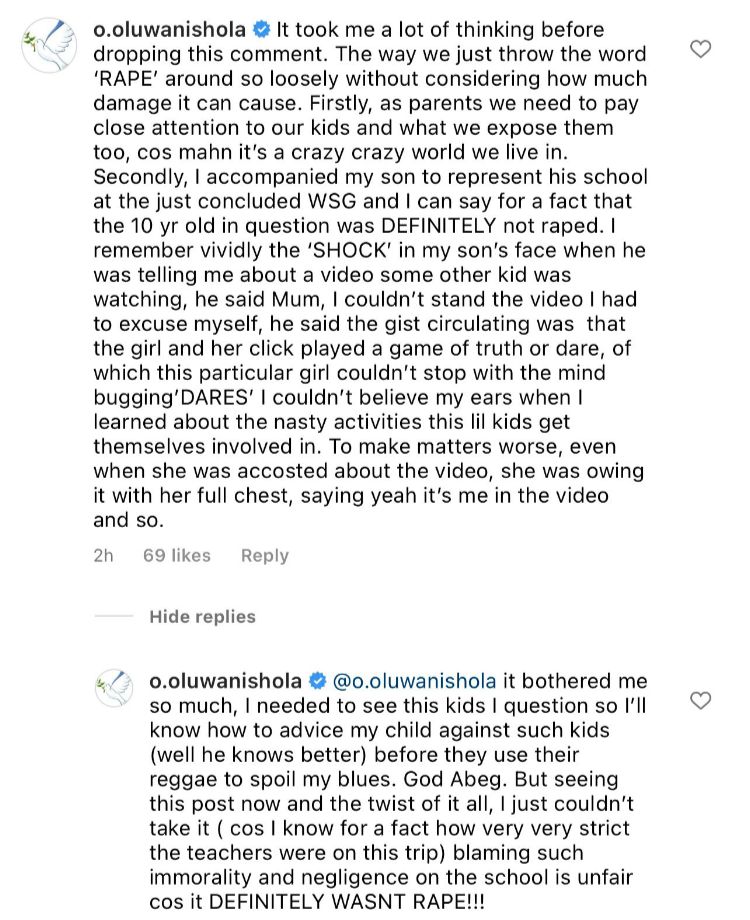 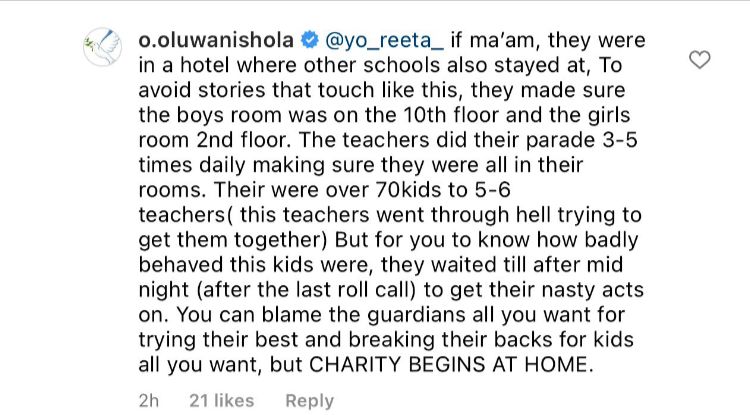