With a heavy heart, a woman identified on Twitter by her handle as @RebelleKush has dragged a certain Nigerian hospital which she claims caused the death of her twins.

Narrating her story, the lady recounted how she became a mother on the 4th of July, 2021, only to lost them the following day because the Nigerian hospital they visited lacked good and adequate neonatal care services.

In a series of tweets, she poured out her sorrow;

“It’s weird how we became parents on July 4th 2021 and then unbecame parents a day after. My twins boys Morayo and Moroti Kushimo have gone to be with the Lord. At 24 weeks, what was I expecting right? A miracle of sorts.

My water broke at week 21 but I pushed till week 24, so I could at least give them a fighting chance. I was hospitalized for 3 weeks on complete bed rest. Subjected to calling for help to eat, to poop, to bath. I had to wear compression socks for those weeks.

I was prodded every 72 hrs for blood tests, just to make sure I wasn’t getting an infection that could ruin my life whilst fighting for my babies lives. I fought so hard! The battle wasn’t just physical, it was mental, emotional, psychological and everyhow but I was willing

If it meant my babies would get a chance to live. See, these were expensive babies. They were IVF conceived and everything was planned to the T. I would birth them in the Uk but I visited Nigeria and things changed in seconds. Nigeria killed my babies…”

Read the full story below: 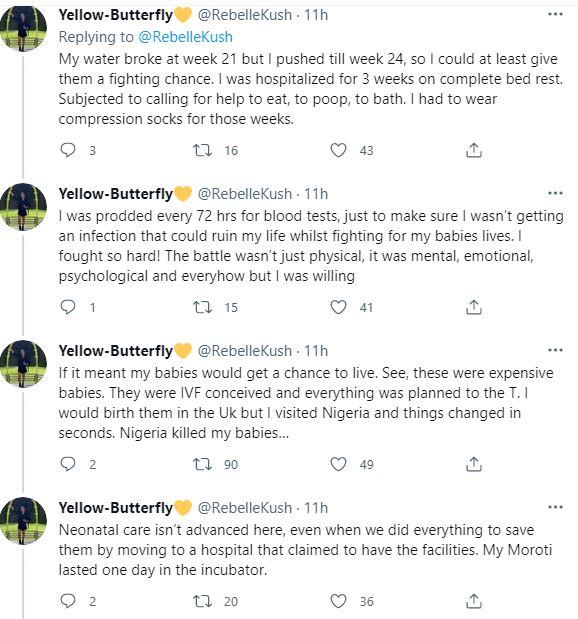 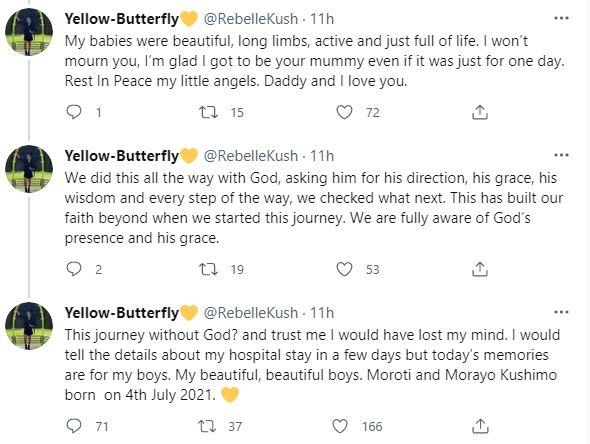