According to those who have seen the movie, Yomi Fabiyi changed the narrative of the rape case and made it look like the minor was having an affair with Baba Ijesha, who is now facing trial for child molestation and sexual abuse.

The movie, which has become a topic of discussion on social media platforms, generated widespread criticisms from many Nigerians who condemned the film.

Reacting, Yomi Fabiyi, in a post shared on Instagram, said he had directed the removal of the movie from public space for the sake of peace.

However, the movie is meant to correct child abuse, assault, human right and other vices without any attempt to downplay issues concerning rape or child molestation.

He wrote: I have ask they pull or private the movie for sake of peace. The movie is however to correct child abuse, assault, human rights abuse and other vices to state clearly I am not what they claim I am initially.

Don’t rush on any negative narrative guys, I am human but will never downplay the real issues that concern children. It is just an expression and I respect polite and superior arguments or opinions. Thank you lovelies.

The STORYLINE is good and meant to inject right values, correct ills and educate but social media will always go this route. Thanks for reaching out and expressing yourself on the movie.
Thank you sirs and mas 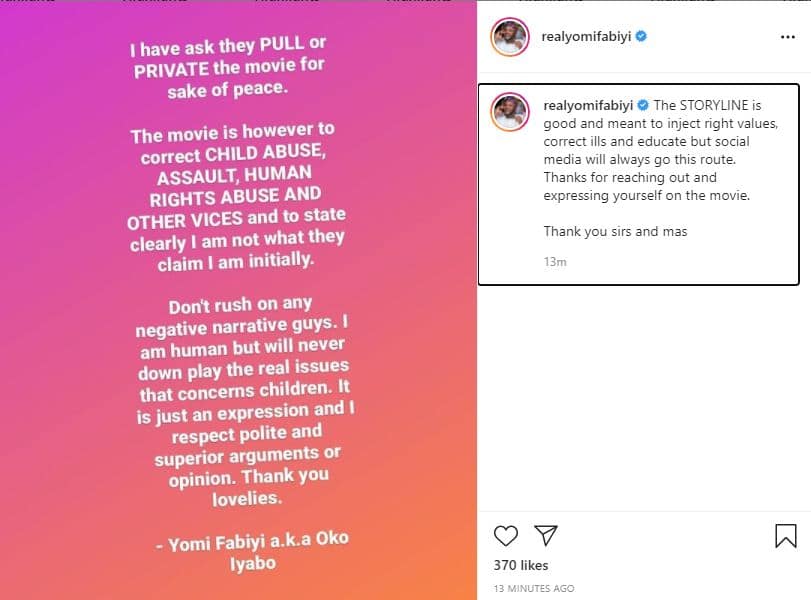 Yomi Fabiyi drags Toyin Abraham’s husband, Kola Ajeyemi, says he is being controlled and fed by her