In a post shared on his Instagram page, the actor said he would honour the invitation notwithstanding his initial schedules before the association served him the letter.

Yomi Fabiyi wrote: Many thanks for your invitation @tampanglobal. I shall loose no time to look into my initial schedules before this letter came in and respond with the earliest possible time and means of attendance. Accept my warm regards.

Yomi Fabiyi reacts to TAMPAN summon over his new movie..

Naijabulletin News recalls that TAMPAN, in a statement, condemns Yomi Fabiyi’s new movie, ‘Oko Iyabo’ stating the actor’s invitation became necessary because of the controversy the movie has generated against their ethics and virtue.

READ ALSO:  ‘I should never be made a scapegoat’ Yomi Fabiyi reacts to Lagos State decision to prosecute him over his movie ‘Oko Iyabo’

The TAMPAN committer on ethics, conflicts and resolution wishes to inform the general public that the association has summoned Mr Yomi Fabiyi who is the producer and director of the controversial film titled ‘Oko Iyabo’ to appear before it on Thursday 11th July 2021.

The invitation becomes very necessary because of the controversy that the subject matter of the film has generated which is against our ethics and virtue.

Despite that, we realise that the film sparked off another round of dissension between Tampan and the public, this is unacceptable to us and unsuitable to what we represent.

We hereby imply the general public and the parties concerned to please exercise patience as our eminent association is on top of this issue and will certainly ensure fairness and justice. 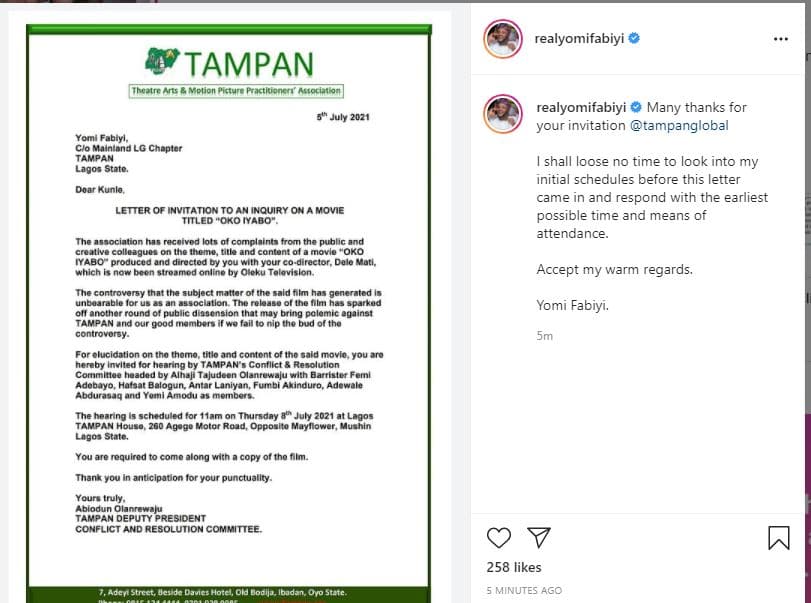 Yomi Fabiyi reacts to TAMPAN summon over his new movie..

“Lord, heal our land from this pandemic called Yomi Fabiyi” Reactions as Toyin Abraham prays for husband after attack from Yomi