Laide Bakare has dragged her colleagues who failed to congratulate her and shunned her housewarming party.

News reports that the single mum of three over the weekend threw a lavish party for the housewarming of her N100million Lekki mansion, but surprisingly many of her colleagues, including her close friend, Yomi Fabiyi failed to honour the event.

The actress, who on March 30 unveiled her house and threw an over the top birthday bash, was utterly shunned by her colleagues.

Only a few celebrities were spotted at her party, and apart from Regina Chukwu, no one publicly acknowledged her.

However, a few hours ago, Laide Bakare took to her Instagram page to express appreciation to everyone who had honoured her with their presence at the event.

Laide Bakare said the whole world was watching online and offline, and she was amazed that the entire Lekki/Ajah axis stood still for her housewarming party.

Taking a swipe at some of her colleagues who shunned the event, Laide Bakare said those who missed the housewarming party missed out big time.

She wrote: The whole world was watching both online and off line. i was actually flabbergasted the entire lekki/Ajah axis stood still for #LaidebakareNewhouseopening so much more that no one was missed, Na who miss my party, miss out Big Time watch out for #laidesotheatredowo series2 , coming to rule your screen very Soon!!!! Thanks so much my Daddy @k1deultimate , you are greatly Appreciated sir.

News recalls Laide Bakare had fired back at her colleague Nkechi Blessing after a subtle shade about the worth of her new house.

Nkechi Blessing, in what seemed like a subtle shade to Laide Bakare, claimed that her new house, which she unveiled in February 2022, is worth a whopping N800 billion.

This comes a few weeks after Laide Bakare stated that her new house recently unveiled was worth 100 million Naira.

Nkechi Blessing said, “Chilling in my 800 billion naira house as all of us dey lie now”.

However, Laide Bakare, in a post shared on her Instagram page said there is no room for fake zone and fake life.

Laide Bakare said everything about her is organic and genuine, and everyone living a fake life should change their ways before it is too late.

She wrote: I’m Olaide, what you see is what you get, No fake Zone, No fake life, All organic and Genuine, To anyone living A fake life ,change your ways before its too late”. 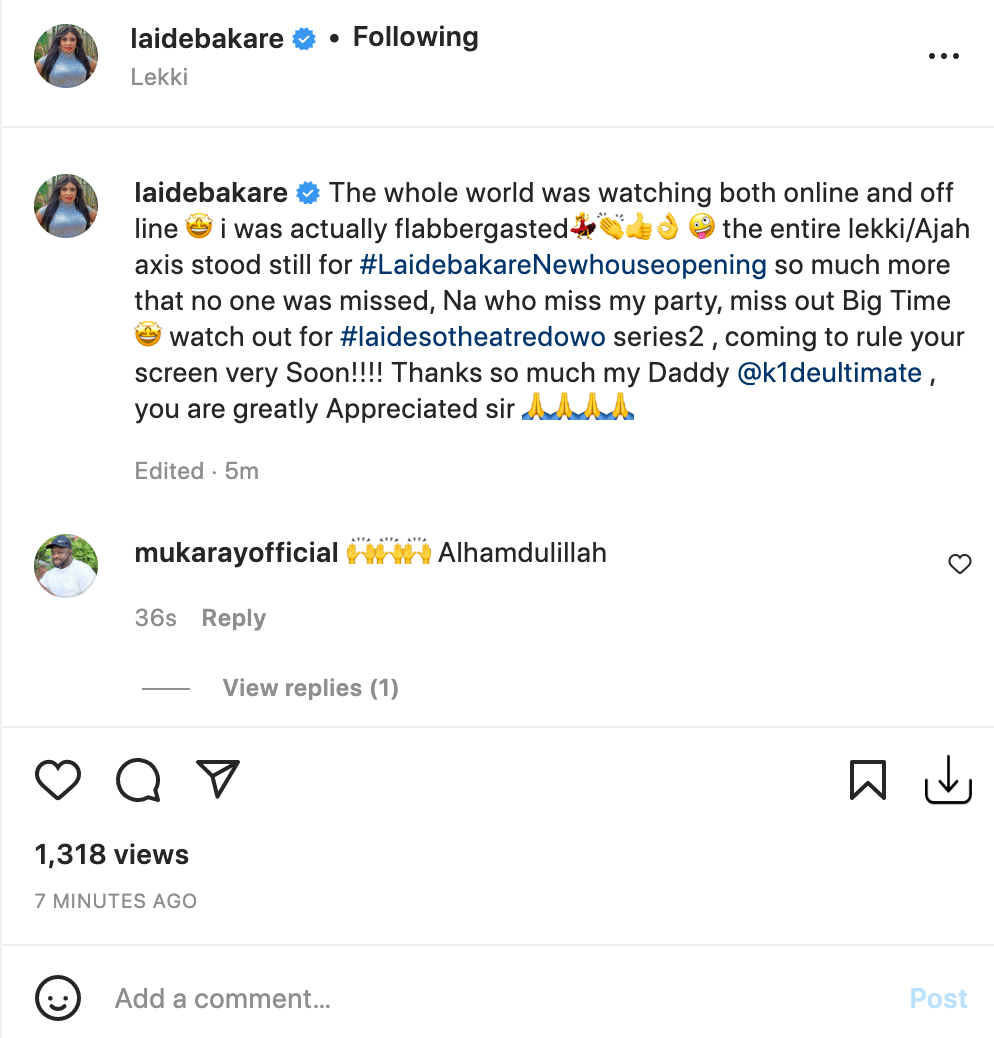