Nollywood actor, Yul Edochie has hailed his colleague actor, Zubby Michael as the richest actor in the game.

Recall that In an interview with Broadway Tv, Zubby Michael had bragged that he’s the richest actor in the Nigerian movie industry after making a whopping N102 million just from his craft as an actor.

He said:  ”The last time I checked, I realized that I made 102 million Naira. I don’t pay tithe and believe in all those church things so I share the 10 percent of my income with people.

If you see me throwing money to people, you won’t understand me but that is my tithe.”

Zubby Micheal also denied claims he is involved in laundering money and carrying out other illicit businesses. Forget about those talking nonsense, I won’t go into laundering or such things because I’m not desperate for money, I don’t worship money.

READ ALSO:  #USElection2020: “Election Can Give Somebody High BP” – Davido

Its just that my success confuses them but i hate explaining myself because a clear conscience fears no accusation” he added.

Taking to his Instagram page, he wrote:, ““So I heard Zubby said he’s the richest actor in Nigeria.

Well I think I’ve been quiet for too long. It’s time for me to tell you all the truth about him.

And the truth is, he’s right. He’s the richest actor in Nigeria.

READ ALSO:  Bobrisky accuses poor old woman, the grandson he helped a few weeks ago of defrauding him | Watch

No contest. @zubbymichael where una dey see this money? 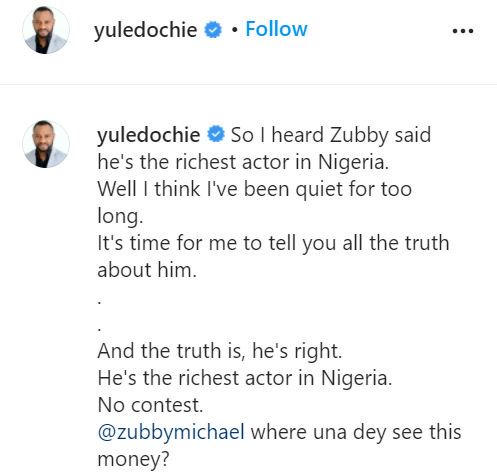