Nollywood actor Zubby Michael and his colleague Chizzy Alichi engaged in a social media fight over Sola Sobowale in the movie ‘King of Boy’.

Trouble started after Zubby Michael rubbished the most talked out movie ‘ King of Boys’, saying that a woman can never be king of boys.

Responding to the post, Chizzy Alichi said a woman could be anything and whatever she wants to be and what a man can do, a woman can do better, adding that the movie has her vote.

Displeased with the response, Zubby Michael blasted Chizzy describing her as a local girl who always imitates the western world.

Zubby Micheal hurled insults at the actress, stating he does not have her time but will talk to her husband.

Chizzy, who felt Zubby Micheal had disrespected her husband by dragging him into the issue, slammed him, stating that Zubby lacks home training, but she would talk to his mother to teach him manners.

Zubby Micheal: A woman can never be king of boys.

Chizzy Alich wrote: A woman can be anything and whatever she wants to be. What a man can do a woman can do better oba my vote.

Zubby Micheal wrote: Konow your category local gir wey the copy oyinbo, I will talk to your husband later not you darling. Ndi ala Ndi ala nonsense and ingredients.

Chizzy Alichi wrote: I said what I said without insult but because your mama no train you well, you decided to insult yourself. I will talk to your mother not you my darling so she can teach you mamers local dog. 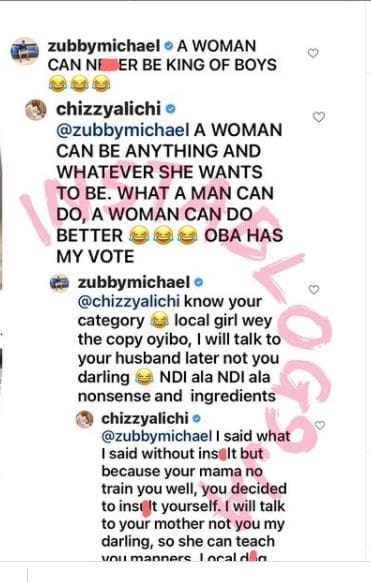