to the rape allegations against veteran actor, Baba Ijesha.

According to Bukunmi, she has been broken since she saw the video where Nigerian comedian, Princess narrated how Baba Ijesha was caught molesting the 14-year old.

Speaking on the issue, the mother of one said people should not be quite on cases like this, rather they should

speak up and find justice.

“Me watching @princesscomedian cry in that video breaks my heart to tears too. Why do this to a little girl?

Why? You people don’t even care about the pains parents go through to birth and raise these kids. Not even the psychological and medical damage you cause, when you molest them. A child you were supposed to even

protect and care for because they look up to you as an adult. Please let not be quiet on this matter. At least to encourage and give the rest of the kids who are still being molested and scared to speak, the courage to speak

up too. This thing happens to both male and female kids. The males just don’t get to talk about theirs until

READ ALSO:  ‘Show me a 43-year old that looks younger than me’ Mercy Aigbe brags out her ageless beauty

they are all grown up as adults and healed enough to mention it among friends. Then you realize most

grown men around you were once molested by some of the people they can aunties or their househelp.

Se won sepe fun yin ni?? We being quite on molestation or rape issue is we silently killing the rest of the 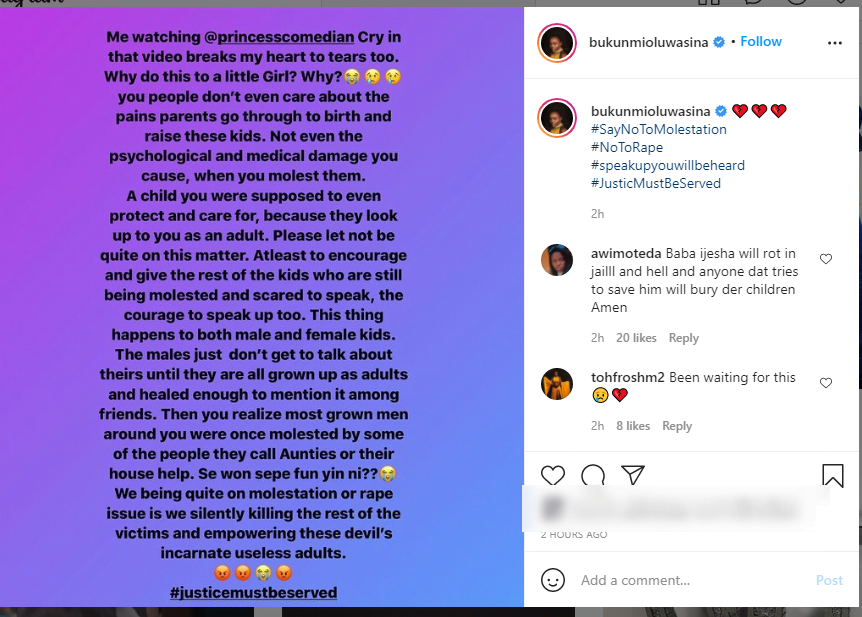 I am in shock – Actress, Bukunmi Oluwasina says after bagging 3 awards at Nigerian Achievers’ Awards

Mercy Aigbe confirms living on lies to make a livelihood