I will forever love you, my hero’ Actress Iyabo Ojo expresses undying love for her son » Naijabulletin
BREAKING
Published on: September 17, 2021

Nollywood actress Iyabo Ojo is undoubtedly a lover of children, and for the umpteenth time, she has proven this in recent social media post.

The actress, who recently revealed she’s considering leaving the country following the incessant insecurity challenges, killing, kidnapping, increase in the dollar, among others, took to her Instagram page to celebrate her son ahead of his birthday.

In the post, the actress expressed love for her son, Festus Ojo, saying she loves him before, after and will continue to love him.

He wrote: Happy birthday in advance King….. it’s all about you come June 21st ….
I Loved before, Loved you after …….& will forever Love you my Hero ….. @festo_baba.

READ ALSO:  ‘The birth of Ireoluwa added so much joy and happiness to my life’ Toyin Abraham

Naijabulletin News recalls that Iyabo Ojo recently revisited her feud with Faithia Balogun, as disclosed in a chat shared by an Instagram blogger identified as xoxoconer alleging that Iyabo Ojo has been poking Fathia for a while, and Fathia has kept mute.

According to the blogger, Faithia’s silence angered Iyabo Ojo, prompting her to report to Esabod, who has now over escalated the matter, and Faithia may want to respond to the issue.

The chat further disclosed that Iyabo Ojo had lied to Esabod about Faithia, saying she attacked her spiritually and peddled rumour about her having an infection due to her surgery. 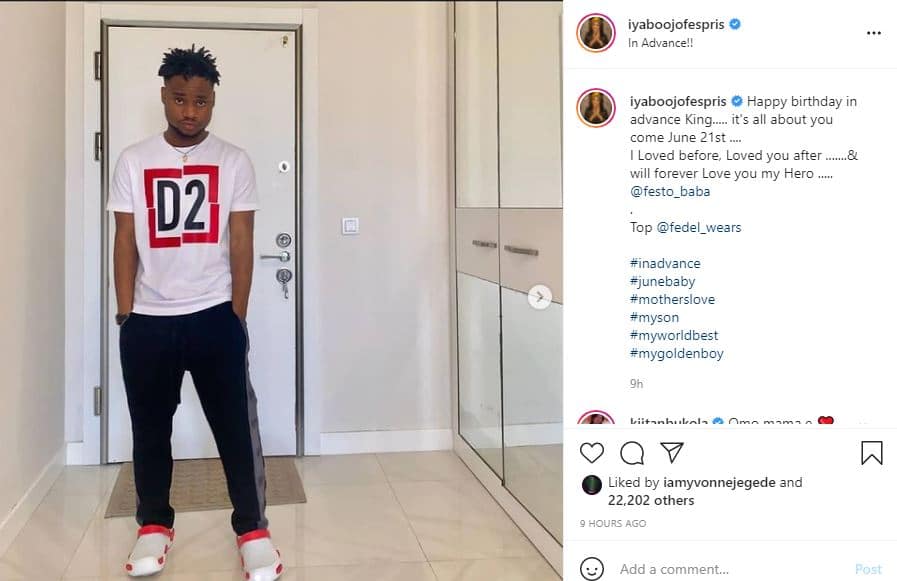