Prince Kpokpogri was arrested on Monday night and released from police custody on Tuesday evening, a piece of news he has debunked.

Tonto Dikeh’s ex-lover during an Instagram live session said he was never arrested and has been at his mansion since yesterday.

According to Prince Kpokpogri, he has been seen all that is happening online but decided not to react but respect the Muslim celebration.

Reacting to this, Tonto Dikeh, in a post shared on her Instagram story, shaded the heck out of Prince, stating he always bragged about being untouchable, but a woman has touched him.

Tonto Dikeh also dragged Prince Kpokpogri, stating he lies too much, adding he was arrested and released.

She wrote: I am untouchable but woman touch you, you lie too much, arrested and released.

News recalls Prince Kpokpogri was reportedly arrested on Monday evening after a public altercation with the actress at a hotel in Abuja.

According to Nigerian Journalist Stella Dimoko, Korkus Prince Kpokpogri traced his Lexus SUV to the parking lot of a hotel in Abuja where Tonto Dikeh had lodged. He jammed the tires of the case and used a white car to block it from being moved.

SDK revealed that Prince Kpokpgri’s action caused an uproar at the hotel and his police escort reportedly threatened to shoot a female staff of the hotel who tried to intervene.

According to SDK, Tonto Dikeh and Prince Kpokpogri were summoned to the Police CID, where they were both quizzed on the incident, and the actress was allowed to go home while Kpokpogria was detained for harassment. 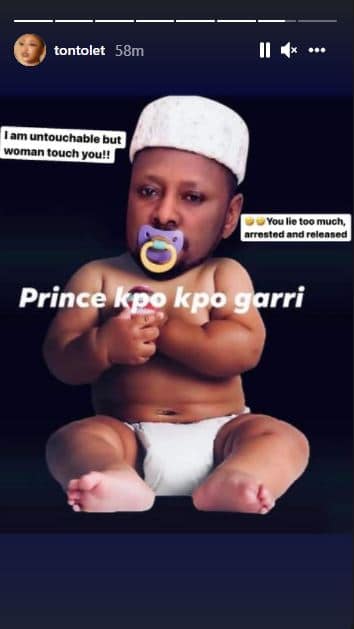 ‘This man has no shame’ Prince Kpokpogri sparks outrage as he drags Tonto Dikeh, to court, demands N10bn compensation