Just like icing on a cake, Nollywood actress Jaiye Kuti received a surprise car gift a few days after her birthday.

The actress had celebrated her 50th birthday on 11th July 2021 with several stunning photos, birthday wishes and prayers from her fans and colleagues.

Jaiye Kuti, in a post shared on her Instagram page on Monday evening, disclosed she received a car gift from her friends.

She expressed appreciation to her fans and colleagues for the thoughtful prayers, videos, love and messages she had received on the occasion of her birthday.

She wrote: An icing on a very sweet cake. The sweet wishes. The thoughtful prayers. The melodious songs. The funny videos. The love. The care. And now… This birthday present of a car from my family at SS AFRI. @ssafrihomes @lereayeni @sundayayeni2009 @bunmi_jinadu

Reacting, some of her colleagues such as Faithia Williams, Kemi Korede, Biola Adebayo and many others stormed her comment section with congratulatory messages.

Biola Adebayo wrote: Congratulations Aunty mi, just give me the key for a month 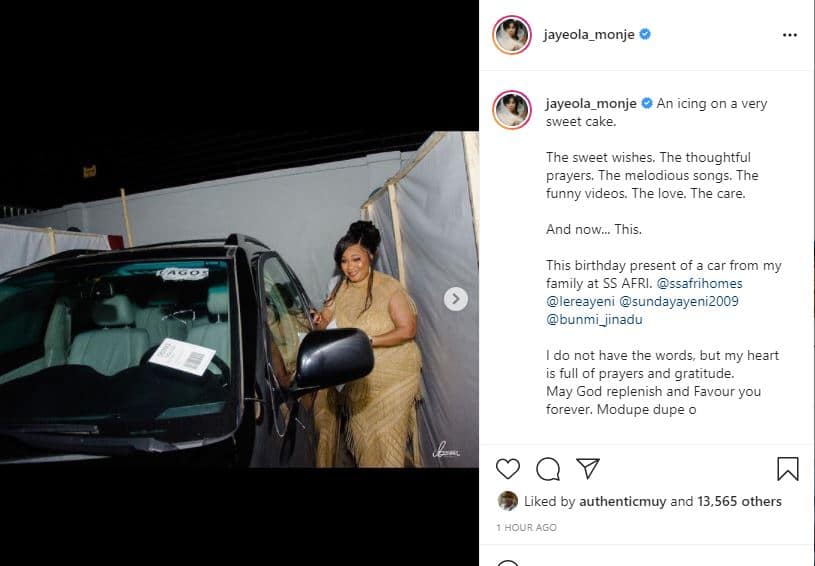 Biola Adebayo others react as Jaiye Kuti gets surprise car for her 50th birthday..

Trouble looms as Jaiye Kuti shades Iyabo Ojo and Omo Brish in her birthday message to her bestie, Bimbo Oshin