This comes amidst the social media drama that he has been enmeshed after an Ivorian lady who tattooed his name on her body accuses him of assaulting her.

In a post shared on his Instagram page, Bobrisky said he is still surprised at a fan who tattooed his name from his heart and not for money, clout or fame as he deliberately ignored him.

However, the crossdresser has decided to reward the fan with a multimillion car while assuring him that all the car document will be in his name.

Bobrisky wrote: @kunlex_botanical I lost many words today, but you know what God will continue to bless you for me . You surprise me today. Out of everybody that drew my face or name on their body, dis was d only guy that drew his tattoo from his heart not for MONEY, CLOUT, or FAME. Go to his page he is a pure hustler Till today I haven’t given him anything, seen him in person. I was expecting him to say a lot about me or snitch. @kunlex_botanical you are a great guy.

Everybody needs to learn from you. Your patience is priceless. Definitely, if anyone come to me with a bad mind of scamming me or coming to clout chase with my name what do u expect you will see from d person.
pls come pick dis tomorrow. Wait let us scatter everywhere tomorrow first. All d document will be in your name. Pls look ur best tomorrow cos we are giving dis to u. Lastly, I’m fucking slaying tomorrow too.

READ ALSO:  Eniola Badmus in trouble for mocking people who only offer prayers without financial support to their sick friends

wu_ra_ola_gold wrote: he will later go come and say bobrisky do so …so

syndhia_cee wrote: This is how u will be posting and posting but lie lie we Dey here for this matter

jermine.bj wrote: Bob will never cease to amaze me …..her drama don pass nollywood own 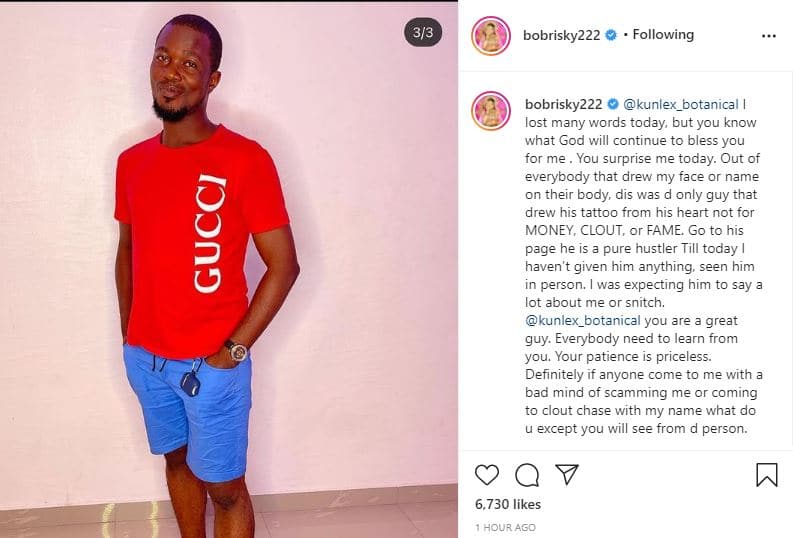 (Video) Bobrisky shows off result of his butt enlargement surgery

Bobrisky shows off his ‘mystery lover’ in hotel room (Video)