Actor, Bolanle Ninalowo has taken to his official Instagram page to blow hot and threaten his colleague, Yomi Fabiyi over the release of his new movie titled ‘Oko Iyabo’.

Yomi Fabiyi became the subject of discussion on Social media after the release of a movie he made to tell the story of what transpired between Baba Ijesha, Iyabo Ojo and Princess on the 5th of July.

In the movie, Yomi went as far as making characters of the movie use the names of persons involved in the controversial issue including actors Iyabo Ojo and Olarenwaju Omiyinka aka Baba Ijesha. He made an exact scene with the disturbing CCTV clip, but this time he portrays Baba Ijesha’s child victim as his willing lover.

Reacting to this, Ninalowo who could not control his anger vowed to lose his manners and also threatened to deal with Yomi Fabiyi when they see physically.

“MUTHAFUCKER ni motherfucker yi mehn!! I loose manners on this motherfucker @realyomifabiyi Agbalagba oponu ni eh! If you go like respond to me, abeg lets make it in person fucker! On Apologies to my fans and kids … #postdeleteonehourforthefucker” 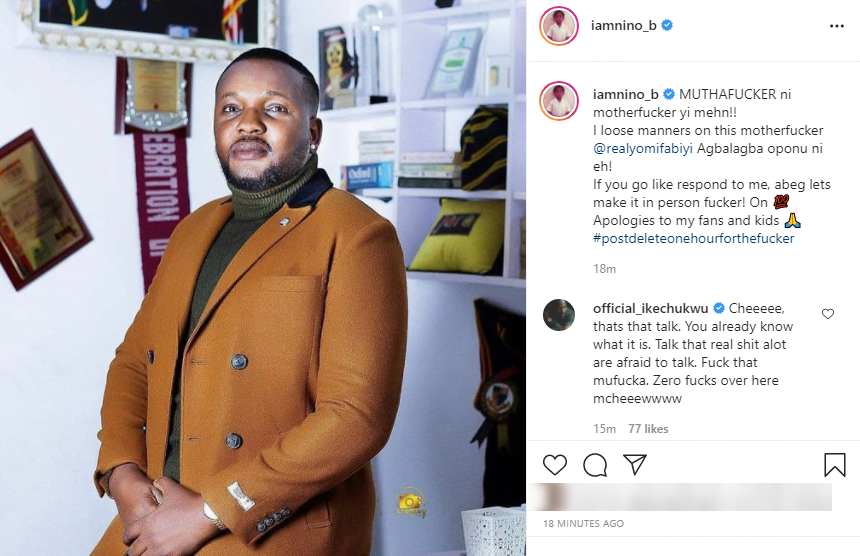 @oluwatoasyne wrote “Makanaki don vex… That dude is a nuisance”

Funke Akindele, others react as Bolanle Ninalowo reunites with his children | Video