Uyoyo Ugboma, daughter of a Nigerian Comedian, Bovi Ugboma, has pleaded with her dad in a hilarious video to reconsider an unruly judgement passed on her.

Sharing the video on Instagram, Bovi said she would go to hell for lying.

In a state of fear, she covered her father’s mouth not to disclose the crime she committed that would warrant going to hell.

READ ALSO:  ‘You are my great influence’ Actress Debbie Shokoya flatters her parents

Shedding hot tears, she gestured to her dad to take back his judgement.

Bovi wrote:
She lied! Told her she was going to hell. The rest of us are going to heaven. Naim be “daddy take that back” with severe tears 🤣🤣🤣 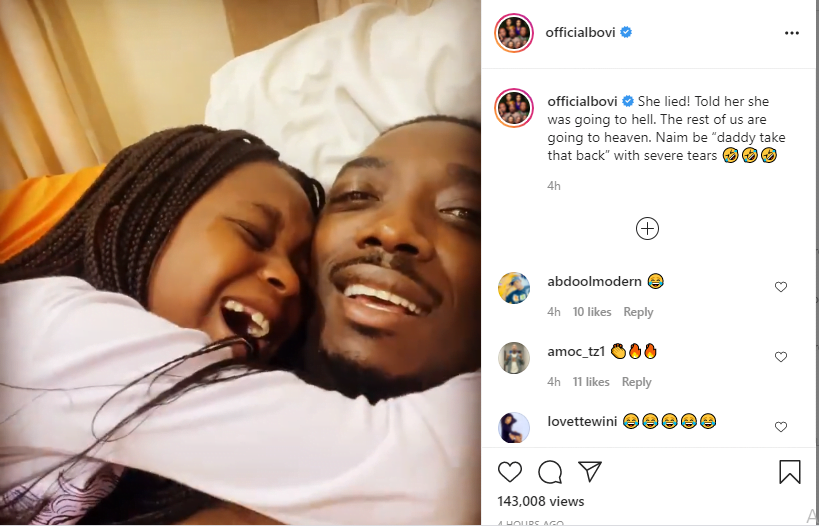 News recalls the Comedian’s revelation of gender preference stating he never wanted a girl child, although there were no reasons given for such sentiment.

READ ALSO:  Skit Maker, Ash musy lucky to be alive after a truck rammed into her car (Video)

Bovi’s decision may be connected to a preconceived notion that a son and not a daughter can only carry the burden of responsibility and family legacy.

Bovi daughter cries uncontrollably, pleads with her dad to reconsider his unruly judgement…

‘Feels good to be on the 5th floor’, Comedian AY blesses the internet with photos to mark 50th birthday

‘You took the ugliness from your father’s village’,Bovi’s wife to her daughter during a hilarious argument