‘Can You Put Your Lips Near Your Mum?’ – Reactions As Cross K!sses Mother On Lips (VIDEO)

Cross Ikechukwu, a well-known reality star, causes a stir after sharing a touching moment with his mother after months of being separated. 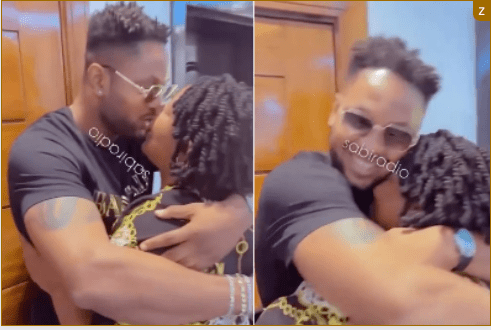 A touching moment occurred when the reality, which had been separated for some time, reconnected with his mother.

Cross hugged his mother and gave her several kisses on the lips in a viral social media video.

But, many were taken aback by this, which led to a barrage of reactions from the BBNiaja star’s fanatics.

Here are some of the reactions from people.

@morafa_official; wrote, “I love my mom than myself but I can’t just kiss her on her lips.”

@anita_chimany; “I don’t like the kisses tho both I love their bond.”

@midesmart; “It’s always the slight kisses for me cross wife should be ready.”

@rukqueen_brighton; “Hmmm if I carry lips near my mum lips she fit kill me oh I love this”.

@ronnyeboony; “Love Love Love…. Everyone wants a Beautiful Family I admire Cross and His Mom so so much.”

@osasu__; “What is an African mother reunion without the prayers?😂”

Award winning music star, Davido has dropped hints that he is back with his ex fiancee and third babymama, Chioma Rowland.

News reported that the lovebirds, who were one of the most talked about couples in Nigeria, shocked many when they broke up in 2021.

According to reports, Davido’s numerous affairs and the birth of his fourth child, who he welcomed with his make-up artist, Larissa London, added to their split.

Their relationship took a nosedive in Feb 2021, when Davido was spotted holding hands with Yafai, an Instagram model, while on holiday in the Caribbean.⁣

This was followed by a series of loved-up photos of the two that broke the Internet in March 2020.⁣⁣

However, the couple reunited early this year as they were spotted attending several family events.

Davido gave her and his son, Ifeanyi, a royal treatment as he flew them to London for his 02 Arena concert in March.

Their romance was short-lived as they broke up again, and Davido moved on to Ama Reginald, an Instagram socialite, while Chioma was rumoured to have briefly dated King Carter.

Since they re-followed each other in June, the parents of Ifeanyi have b…CONTINUE READING…