Controversial British journalist, Piers Morgan has called for Arsenal manager Arsene Wenger to be ousted and be replaced by no other person but President Donald Trump.

According to the TV presenter, he wants Wenger who has not won a Premier League title for 14 years to be replaced by Trump because he would build a ‘strong defensive wall’
Teasing his exclusive interview with the US President on Twitter, Piers shared a photo of himself holding an Arsenal shirt with the name ‘Trump’ on the back while sitting beside the billionaire.
He said: ‘The moment I invite President Trump to be Arsenal’s new manager – because he’d build a strong defensive wall, have an attacking philosophy and want to win big trophies at all costs.’ 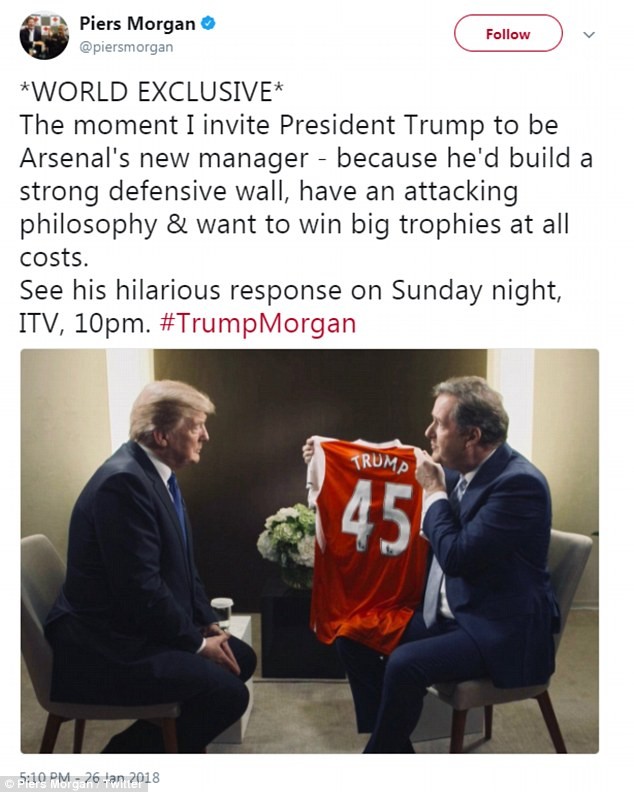 Meanwhile, Arsenal are three points behind arch-rivals Tottenham and five behind fourth-placed Liverpool, who occupy the final Champions League spot
Despite the calls for Wenger to step down, he has refused to, insisting he’s the best man for the job.
READ ALSO:  Obaseki considering dumping APC -Oshiomole