‘You are out of the house, yet you act like everyone is your housemate’ Fashion brand calls out BBNaija’s Vee for owing N1.9m | Naijabulletin
BREAKING
Published on: October 27, 2021

A fashion brand has called out former Big Brother Naija Housemate Vee for owing the sum of N1.9million following the termination of their contract and her ambassadorial deal with the brand.

In a post shared on Instagram, the brand pointed out the negative attitude of the reality TV star during the product photoshoot.

The brand alleged that Vee refused to refund the money paid for the ambassadorial deal and took some of the items used for the product shoot.

Meanwhile, Vee has disassociated herself from the brand and urged the general public to regard her posted images as false advertising.

However, the brand has insisted that it will not stop post content and images of Vee until she pays back the money she owes the brand.

When you were calling for this deal we considered as we believed you would add value, little did we know it was going to be the other way round! … After paying, right on the first day of the set, everyone stressed to work with you, we still persuaded them so we could work something out, you looked down on everyone on set including the photographer.

Yet we overlooked and still waited with you till your Uber arrived so as not to leave just you on-site …..the brand has worked with a lot of people with no issues, we can’t cope with your attitude because you don’t even know what it takes to be a brand ambassador, and all this should have been well explained to you before putting pen to paper…

You are out of the big brother house yet you act like everyone on set is one of the housemates. Your manager has said you have been gathering the money and paid a part, you still owe the brand a lot of money ! More details coming soon. kindly pay up

Apparently, Vee paid 2million out of the 2.5m she was given for the deal she refused to honor. However, the shoot including the items she took cost about 1.4million which she insisted on not paying back.

I mean, how can you sign a contract then refused to comply by posting the shoot done after which you decided to delete the picture of the contract signing. I believe we all understand what that means so since you couldn’t fulfill your end of the bargain, we decided to send her manager a mail to terminate the contract after 48 hours without response.

Now she refused to pay for the loss incurred for the shoot, not forgetting that she made away with items worth 400k including the 500k balance from the ambassadorial deal payment, all tuning to about a total of 1.9million.

veeiye, please note that since you have refused to complete the outstanding, the Zeena & Zara brand will use all the content done on the shoot. This was discussed but you insisted on not paying, in case you change your mind, kindly pay up then the content will be taken down from our page. Thank you.

NB, This post is necessary due to the write up posted on her story. 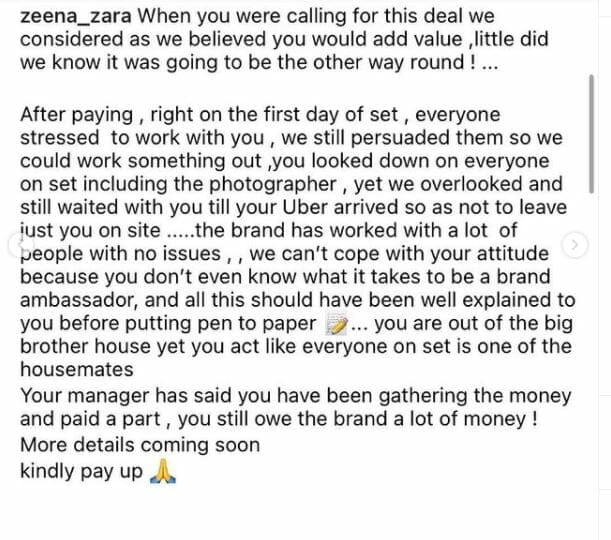 #BBNaija: After Nigerians dragged her for claiming 25, Vee finally reveals her real age

BBNaija Vee reacts after being called out for owing a fashion brand N1.9m