‘I may not be the most successful musician, but I’m one of the happiest’ DJ Cuppy › Naijabulletin
BREAKING
Published on: September 29, 2021

Nigerian female disc jockey and billionaire’s daughter Florence Ifeoluwa Otedola, professionally known as DJ Cuppy, has said she’s one of the happiest in the music industry amid the ups and downs.

In a post shared on her Instagram story, Cuppy said life is too short to be anything short of happy.

The billionaire’s daughter said although she realises some facts about life at age 28. She further advised her fans to live their life fully, have fun, learn, take chances, face forward and do not allow anyone to bring them down.

According to DJ Cuppy, she may not be the most successful in the music industry, but she is undoubtedly one of the happiest.

She wrote: At the end of the day, life is too short to be anything but happy. At 28, I’m just realising it…. I beg you to live life fully. Have fun. love lots. learn lots. Take chances. let go. Face forward. I may not be the most successful in the music industry, but I’m certainly one of the happiest. Don’t let anybody bring you down.

Naijabulletin News recalled that DJ Cuppy a few weeks ago admitted that all she is enjoying is her father’s blood, sweat and tears.

According to the 28-year-old in her post on Twitter, she does not like to talk about it, but it’s the truth, and she is grateful, honoured and blessed to have a hardworking father.

Speaking further Cuppy said she is building her own empire and so that she would be able to give her child some of the benefits she is fortunate to receive. 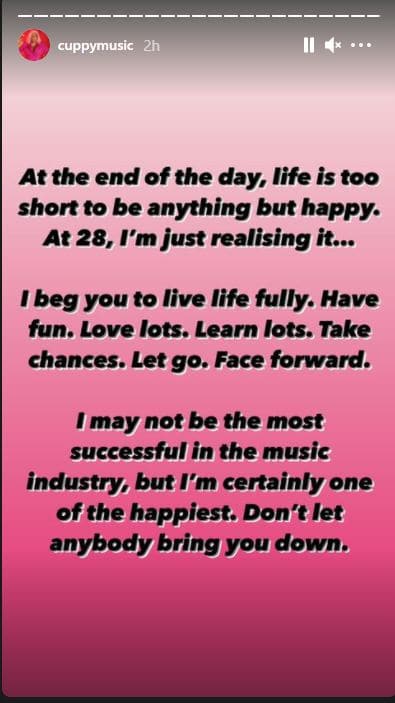 I may not be the most successful musician, but I’m one of the happiest..