‘I was expecting twins but my second baby vanished’ – Kayamata seller, Miwa opens up | Naijabulletin
BREAKING
Published on: October 24, 2021

Popular Kayamata seller, Miwa has opened up on some of the challenges she encountered during her pregnancy.

According to Miwa,  she never knew Kolaq Alagbo had a wife and she only knew when she became pregnant.

During a question and answer session on Instagram, Miwa disclosed that she was expecting twins but one of them vanished all of a sudden and it was a big challenge for her.

“Pls how did you deal with first trimester heartburn and morning sickness. I’m so sick.”

Miwa replied with “Frist trimester was a piece of cake… the only challenge i had was my second baby vanished, i was expecting TWINS.” 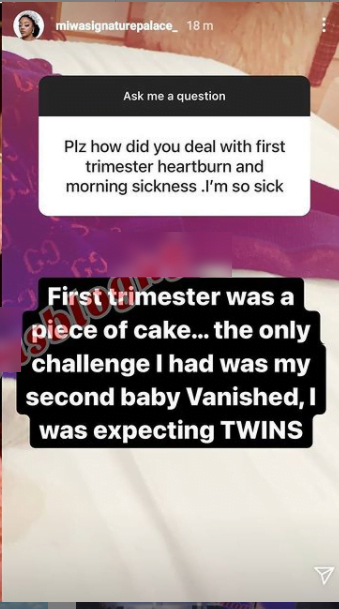 @doctorhealtheducation wrote “Sorry it does happen medically though rare where one of the twins will suck in the second one and it will disappear. Sorry”

READ ALSO:  VIDEO: Bride maintains a frown and refuses to kiss her groom as they tie the knot in Ibadan

@detoke.o wrote “It’s completely real and has happened to me. my 3 month scan saw 2 foetuses, I went back 2 months later and there was only one child. It’s something called the vanishing twin syndrome”

I was expecting twins but my second baby vanished..