Nigerian singer, Davido has postponed Away festival as he continues to mourn his son, Ifeanyi. 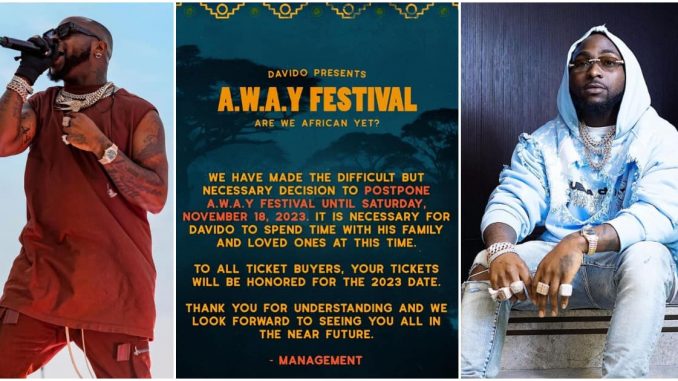 His management released a statement on Wednesday night postponing his Away festival.

On the festival’s Instagram page, the management stated that Davido has postpone the upcoming Away festival to 2023.

According to the statement, Davido desires to spend time with his family and loved ones during this difficult times.

Recall that the singer had lost his beloved son, Ifeanyi on October 31st.

“We have made the difficult but necessary decision to postpone A.W.A.Y Festival until Saturday, November 18, 2023. It is necessary for Davido to spend time with his family and loved ones at this time.

To all ticket buyers, your tickets will be honored for the 2023 date.

Thank you for understanding and we look forward to seeing you all in the near future”.

Singer Davido had made a quick return to Instagram to delete posts and unfollow accounts, days after the death of his only son, Adeleke Ifeanyi.

According to reports, Davido upon his return, made some adjustments to his Instagram profile, as he allegedly unfollowed DJ Cuppy, and his Billionaire father, Femi Otedola.

Davido who has 25.8M followers on his verified Instagram page and followed 1,6777 people before the death of his son made changes as he unfollowed three (3) accounts from his followers.

His reasons for unfollowing Cuppy and her father are unknown to us but it was speculated that the popular Nigerian singer did so because the Otedola went ahead to celebrate his birthday while Davido was mourning his son, even though, they both sent their condolence messages to him.

Aside from unfollowing the duo, Davido deleted all his pinned posts; he also deleted his anticipated festival post, A.W.A.Y, which is slated to take place at the State Farm Arena in Atlanta, Georgia on November 18, 2022.

Femi Otedola had spent 3 million pounds, which is about a 2.2billion naira to rent Aristotle Onassis’ Christina O super luxury yacht for his 60th birthday.

His birthday celebration, however, stirred mixed reactions following the death of Ifeanyi.

One of the commenters queried why he would be celebrating his birthday on water, knowing well that Davido lost his first son by drowning.

Identified as Fair panther lol, he wrote, “As he is richer than David nobody is gonna say how dare you celebrate your birthday on the water when Ifeanyi died inside water”. 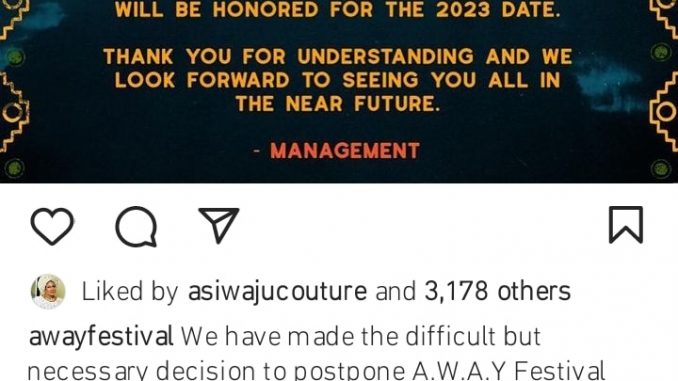 Davido postpones Away festival to spend time with family