‘I’m not a member of TAMPAN’ Actor Yomi Fabiyi reacts to his suspension» Naijabulletin
BREAKING
Published on: September 21, 2021

Nollywood actor Yomi Fabiyi has indirectly refuted claims of being a member of the Theatre Arts and Motion Picture Practitioner Association of Nigerian following his suspension from the association.

The movie, which aired on YouTube on July 4, 2021, featured characters with names of persons involved in the rape case, including actors Iyabo Ojo and Olarenwaju Omiyinka, also known as Baba Ijesha.

Reacting to the suspension, Yomi Fabiyi, in a post shared on his Instagram page, said he’s originally a member of ANTP and will renew his membership there.

‘I’m not a member of TAMPAN’ Actor Yomi Fabiyi reacts to his suspension..

According to the actor, he never obtained or signed any form with TAMPAN or joined any guild adding he was made to pay a registration fee, and there was no formal procedure.

Yomi Fabiyi said the letter from TAMPAN is not valid to him as a filmmaker, and any necessary reaction will be based on the human rights violation.

He wrote: I’m originally ANTP member, the worst case I will renew my membership there. I have never obtained or sign any form with TAMPAN or join any guild. I was made to pay for registration which I did but no form collected or formal procedure.

READ ALSO:  Yomi Fabiyi drags Toyin Abraham’s husband, Kola Ajeyemi, says he is being controlled and fed by her

The letter is inappropriate, not valid for me as a filmmaker. Any reaction if necessary will be on the basis of Human Rights Violation if I so wish to see judicial redress, You don’t lose what you never had. 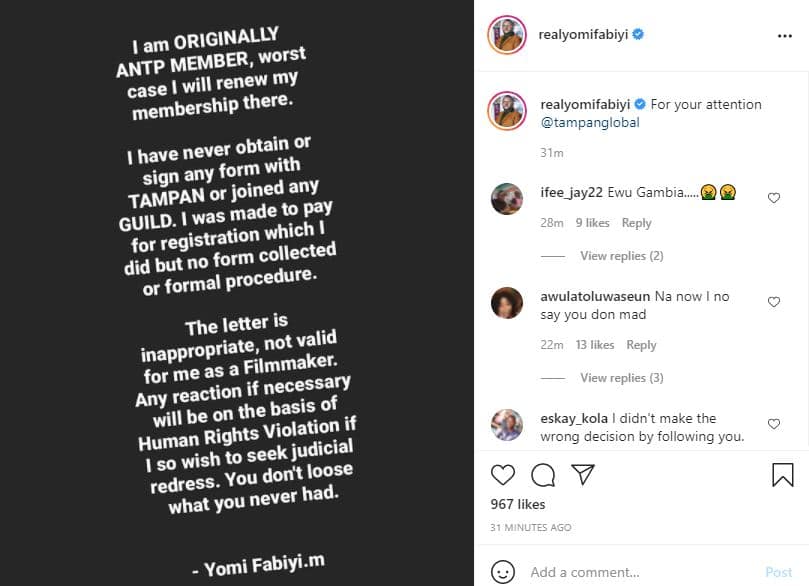 ‘I’m not a member of TAMPAN’ Actor Yomi Fabiyi reacts to his suspension..

(VIDEO) ‘You are disgusting and I regret knowing you’ – Actor, Femi Branch blasts Yomi Fabiyi