Actress, Joke Jigan has taken to her official Instagram page to place a huge curse on Yomi Fabiyi over his new movie titled ‘Oko Iyabo’.

NB recalls that Yomi Fabiyi is one of the few against Iyabo Ojo and Princess following the allegations made against Baba Ijesha.

The activist decided to shoot a movie to tell the story of the allegations made against Baba Ijesha and since then, subject of discussion on Social media.

Joke Jigan and some other actors have, however, taken to their Instagram space to curse, drag and insult Yomi over his new movie. 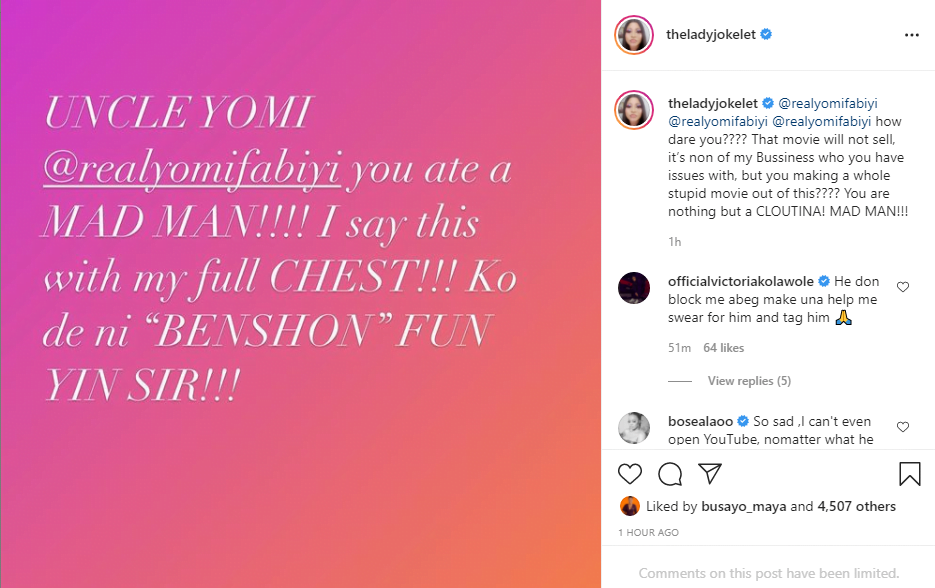 @bosealaoo wrote “So sad ,I can’t even open YouTube, nomatter what he tries to preach, this is not the right time @olekutv this is not fair. Mimicking the footage released is all shade of wrong . This is someone’s Child bro Yomi, @realyomifabiyi is not cool”

@Temitope Solaja wrote; “I am not one to speak out of place, but there are issues one must not keep quiet on. This is one of those issues. Yomi Fabiyi today proved just how much of a shame he is. Under no circumstances should someone’s pain and tribulation be turned into a thing of mockery. You have proven with this act that you are uncultured, lack empathy, and you remain the face of what is wrong with Nigeria today when it comes to sexual molestation. This movie is shameful and is not a work of art. If you had any self respect and dignity you would take it down ASAP. For someone who claims to be a father, I am disappointed in youyou know you’ve been blocked a long time ago, so I don’t need to tag you. Do the needful”