This comes after veteran actor, Jide Kosoko disclosed during a press briefing in Lagos on Saturday, June 26 that Nkechi Blessing and Iyabo Ojo are not members of Tampan and as such cannot be suspended.  However, if as practitioners they engage in activities that drag the name of the union to mud, the union will work against them.

READ ALSO:  “You Must Marry Me” – Toke Makinwa Warns Ghanaian Actor After He Saw Her Without Clothes On Set

Taking to Twitter to react to this, Mr Macaroni expressed his shock at the decision to ban Iyabo Ojo a few hours after Baba Ijesha was granted bail.

According to the actor, it’s an interesting move for the association to see Iyabo’s mistakes after Baba Ijesha was granted bail.

“Tampan suspends Iyabo Ojo. Not only did they suspend her, there was a full press conference stating a million and one things she did wrong. Interesting how this is happening only after Baba Ijesha was granted bail. Really Interesting.” 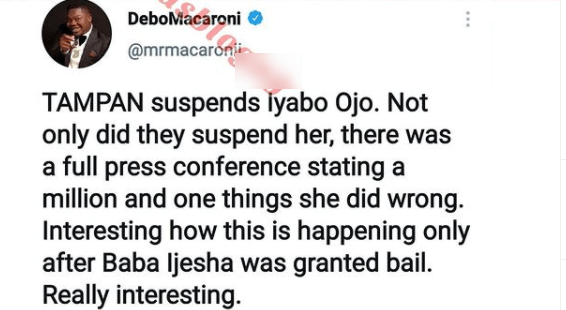 ‘I will forever love you, my hero’ Actress Iyabo Ojo expresses undying love for her son