‘In as much as I would love to remain, you chased me out’ Nkechi Blessing throws shade at Yoruba Nollywood stakeholders » Naijabulletin
BREAKING
Published on: September 17, 2021

Nollywood actress Nkechi Blessing has dragged stakeholders in the Yoruba Nollywood industry for chasing her out of the movie genre.

Nkechi Blessing started her acting career with Yoruba movies and rose to prominence in 2012, with a lead role on Kafila Omo Ibadan. Since then, she has starred in several films, including English movies.

However, a few months ago, the actress was at loggerhead with some stakeholders of the industry over her social media misconduct following the arrest of her colleague Baba Ijasha alleged of child molestation.

Nkechi Blessing was sanctioned alongside her colleague Iyabo Ojo. Also, veteran actor Jide Kosoko threatened to frustrate her in the industry, a statement that did not sit well with Nkechi Blessing, and she publicly dragged the actor.

READ ALSO:  Reactions As Obi Cubana Breaks Silence On The Real Source Of His Wealth

However, in a new post on her Instagram page, Nkechi Blessing appreciates the Yoruba genre platform, which helped her gain prominence in the Nollywood industry.

Nkechi also shared a movie she described as using her blood to act, adding she is grateful for the love and support she has received.

Nkechi Blessing added that in as much as she would want to remain in the Yoruba Nollywood genre, some people had pushed her out, and she has moved on with her life.

READ ALSO:  I love you –Davido tells Cubana Chief Priest after he ‘br0ke his heart’

She wrote: This particular movie, I use all my blood act am. Showing now on Africa magic Yoruba. Big shout out to my Yoruba people for the love has been real from day one. in as much as I would love to remain with you, Una don pursue me but we move!! Shout out to DSTV for d constant show of love. NBS is for ever grateful 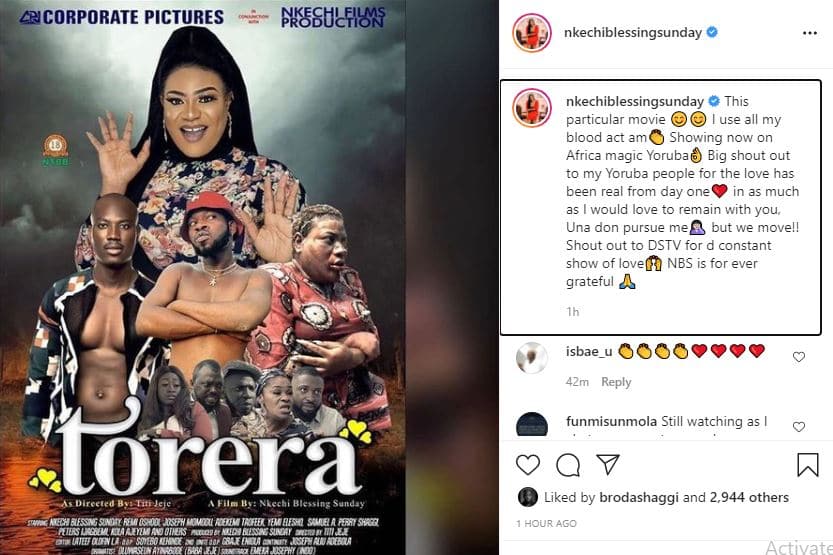 Months after her loggerhead with Jide Kosoko, Actress Nkechi Blessing gets special recognition

Actress Nkechi Blessing cries over being insulted and disrespected