A woman who got a massive butt implant from a quack doctor has landed in trouble after it exploded leaving her in critical condition.

In the quest for physical beauty, a woman has landed herself in serious trouble after her bum exploded after she got fake implants.

The woman whose name is withheld had wanted a big bum so that she could be admired by men, but unfortunately, she got her own implants from a medical doctor who didn’t do it well.

According to a source, the woman in question visited a famous implant surgeon who is well known for restructuring women with substandard materials hence a lower price, the surgeon is well known for uplifting breasts and enlarging hips. 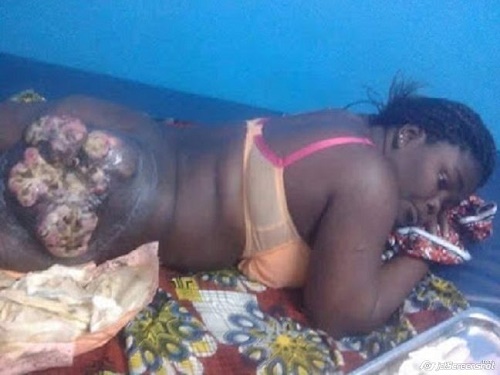 The girl after she her bum exploded.

“When she arrived from the town she went straight to the bathroom complaining about too much heat at her behind, I even tried to regulate the heat with cold water but it didn’t work. After a period of relief she exploded from behind gashing out smelly liquids that were used to inflate her hips,” her sister narrated.

When the paramedics arrived at the scene, she was put on life support as she had lost excessive blood. She is said to be in the Intensive Care Unit but stable.

26 year old Nigerian lady becomes a landlady in the U.S without any financial assistance (photos)