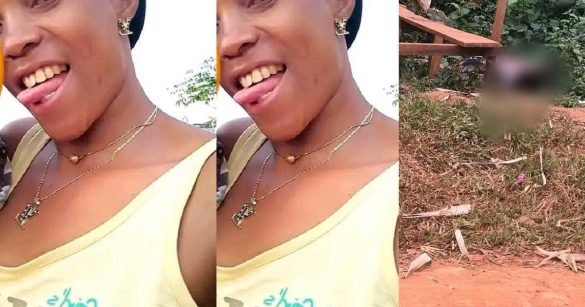 A nursing mother simply identified as Esther, reportedly took her own life over her husband’s plan to marry a second wife.

It was alleged that Esther committed suicide after her husband told her of his plan to marry a new wife.

Local media claimed that the woman’s lifeless body was discovered by the roadside in Nkoabang district in Yaounde on Tuesday, August 23, 2022.

In related news, a23-year-old lady, identified as Jumoke Kehinde, said to be a staff of Shoprite in Akure, Ondo state capital, has reportedly committed suicide after being suspended from work.

She was reportedly found dead on New Year’s eve at her apartment in Kajola area along Oda-road, Akure, after allegedly drinking Sniper.

It was gathered that Jumoke was suspended and asked to return home after reporting late to work on that fateful day.

A source speaking with the Nation said,

“It is normal that anyone who comes late should wait outside before they are allowed in and be given a suspension.

She was seen arranging her table getting ready for the day’s sales as she looked happy but later left the mall at about 11 am after receiving the suspension letter.

At about 4 pm, a distress call was received in the office that she was not feeling fine. One of the management staff went to check on her. Kehinde was found on the floor of her room shaking while her body was oozing with odour of the poison she took. Although, no empty can was found anywhere as she was rushed to the hospital.

After some time at the hospital, she was declared dead. One of her relatives said she did not show any sign of depression.

She was given a suspension for coming late that day. She was told to go home. After then she went back home.

We all know that when you come late you will be given a suspension for a few days without payment.

I don’t see any reason why such an issue would cause her to kill herself by committing suicide.”

A police source said her body has been deposited in the state hospital morgue, however efforts to reach the deceased’s family members and the Management of the shopping mall has been futile.