Nollywood actor Saheed Balogun has been alleged to be among those working on releasing their embattled colleague Baba Ijesha over an ongoing rape and sexual molestation case involving a 14-year-old child.

naijabulletin News a few hours ago reported that a senior officer of the Lagos State Police Command had ordered that the suspect be released because there is no defilement case against him, and the court cannot sit due to the ongoing strike by members of the Judicial Staff Union of Nigeria.

READ ALSO:  Gospel singer, Tope Alabi’s daughter, Ayomikun in paternity scandal as another man claims to be her biological father

The police statement added the CCTV footage only showed Baba Ijesha touching the victim’s body and never showed him having sexual intercourse with the girl, who also confirmed it.

With several controversies trailing the case, an Instagram blogger Gistlovers has alleged that Saheed Balogun is among Nollywood stars sponsoring the release of Baba Ijesha from police custody.

According to the blogger, who disclosed the case is still under investigation, a huge amount of money has been paid for the release of Baba Ijesha.

The blogger wrote: This is one of those working underground for baba ijesha release,I am investigating the case and I think money has exchange hands,but still we demand justice,everyone who has a thing or two about the case will be dragged,I come in peace. 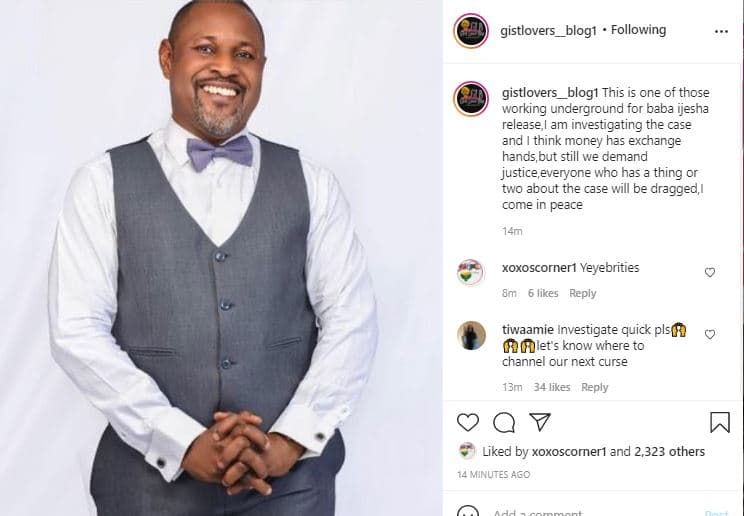