Show promoter calls out Burna Boy over alleged extortion and refusal to perform at a show he was paid for | Naijabulletin
BREAKING
Published on: December 2, 2021

A show promoter has taken to social media to call out popular Nigerian singer, Burna Boy, for allegedly trying to extort him of 10,000 dollars.

The man, identified as @goldmoola, alleged that he paid the singer and his mum who doubles as his manager, Bose Ogulu, money to perform at a show in Houston, Texas, on Sunday, October 31st.

However before the event the singer’s mum requested for an additional sum of 10,000 dollars before the singer would ‘come downstairs’ to perform on stage.

According to the show promoter, when he realized that they were trying to extort him, he changed his mind about having the Grammy-award winner perform at his event and requested for a refund. He claims they refused to refund the money and snuck out of the venue.

Taking to his Instastory, the young man has now demanded for a refund from the self-acclaimed ‘African Giant’.

Read his posts below, 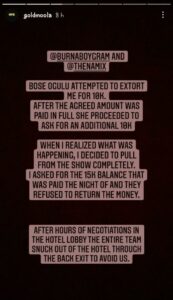 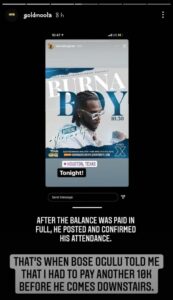