Nollywood actress and philanthropist Tonto Dikeh has revealed what her politician boyfriend Prince Kpokpogri told her when they first met.

Tonto Dikeh, whose relationship with the Delta State politician has remained a topic of discussion on social media, took to her Instagram page to share a quote.

According to Tonto Dikeh, God’s plan is more extensive than an individual’s past, which is the first word her boyfriend told her when they met.

She wrote: God’s plan is bigger than your past. Ok so i stole this Caption From OGA AT THE TOP.. First thing he told me when we first MET.

Naijabulletin News recalls that the Tonto Dikeh had a terrible experience with her marriage to Olakunle Churchill before the union crashed.

However, a few years later, the mother of one earlier in June sent social media into a frenzy with the birthday epistle she wrote to celebrate her politician boyfriend, Prince Kpokpogri.

READ ALSO:  ‘You ‘re talking nonsense’ Actress Tonto Dikeh berates lady who accused her of misleading women with her failed marriage

Although Tonto Dikeh has never shared a photo of Kpokpogri on her Instagram page, bloggers have continued to flood social media with their photos. 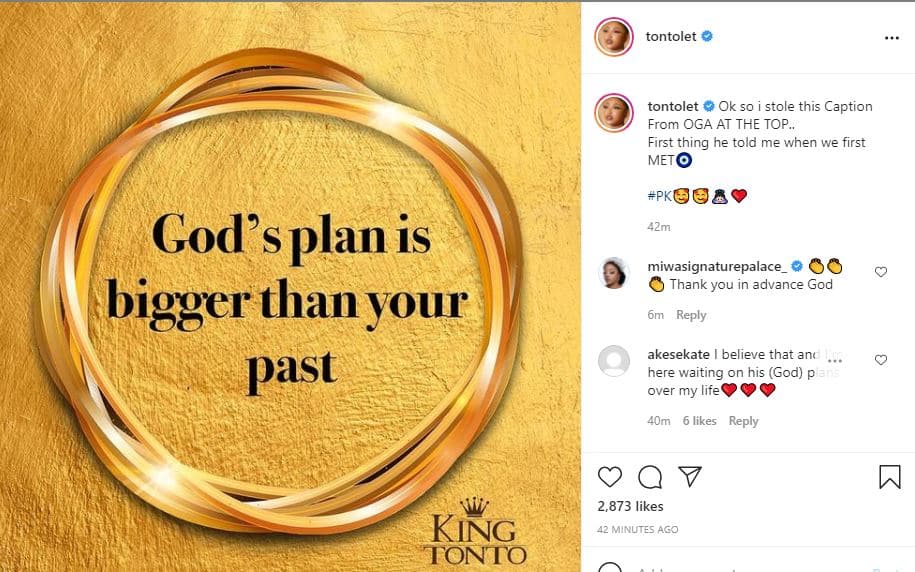 “Blessed are you among women” – Tonto Dikeh’s lover, Prince Kpokpogri celebrates her, she replies