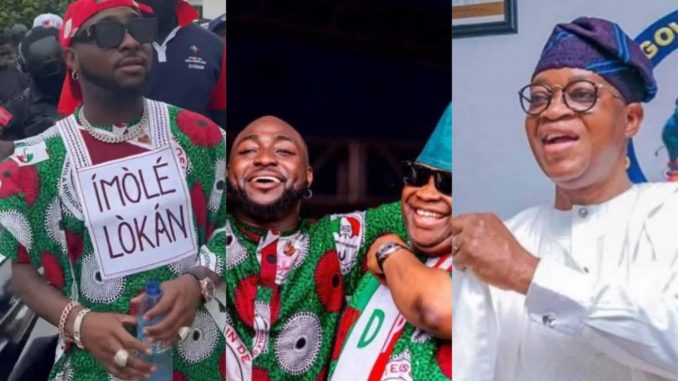 The singer questioned when he will congratulate his successor following his victorious win.

We reported in July that The Independent National Electoral Commission had declared Senator Ademola Adeleke of the Peoples Democratic Party winner of the Osun governorship election.

The Returning Officer for the election and Vice Chancellor of the University of Lagos, Prof. Oluwatoyin Ogundipe, made the announcement at INEC’s collation centre in Osogbo, the state capital.

Ogundipe announced that Adeleke scored 403,371 votes to defeat the incumbent governor, Adegboyega Oyetola of the All Progressives Congress, who polled 375,027 votes.

Adeleke clinched 17 of the 30 Local Government Areas of the state, while the APC won the remaining 13.

Following Adeleke’s victory, Governor Adegboyega, who is yet to accept defeat, has been dragged by Davido.

Questioning him, Davido noted how his uncle celebrated him in 2018 even when the election was rigged.

“Your excellency @GboyegaOyetola when will you congratulate the Incoming governor of your state @AAdeleke_01… in 2018 my uncle congratulated you even though it was stolen…do the right thing baba…one love”.

News recalls Davido had lashed out at the incumbent Governor of Osun State, Governor Adegboyega Oyetola, over his loss.

The Osun State Governor and the gubernatorial candidate of the All Progressive Congress (APC) had broken his silence over his loss in the 2022 Osun State election.

Adegboyega Oyetola, in his reaction to the announced result by the Independent National Electoral Commission (INEC), had appealed to his supporters to remain calm.

Oyetola, who lost the election to the Peoples Democratic Party (PDP) candidate, Senator Ademola Adeleke, said that he had taken cognizance of the results of the governorship election in the State as announced by INEC saying he was studying the outcome.

The governor urged security operatives to ensure there was no breakdown of law and order across the state, noting that the party would be responding appropriately after studying the results and consulting with critical stakeholders of the party.

He directed the security operatives to take adequate charge and asked citizens of the state to go about their business without let or hindrance.

The governor said, “I am calling on our supporters to remain calm, and the people of the State to go about their businesses without let or hindrance”.

Reacting to it, Davido lashed out at him to accept defeat.

He stated that what the governor should be doing was congratulate his successor.

Davido tweeted, “What you should be doing is calling to congratulate your successor. Forget studies”. 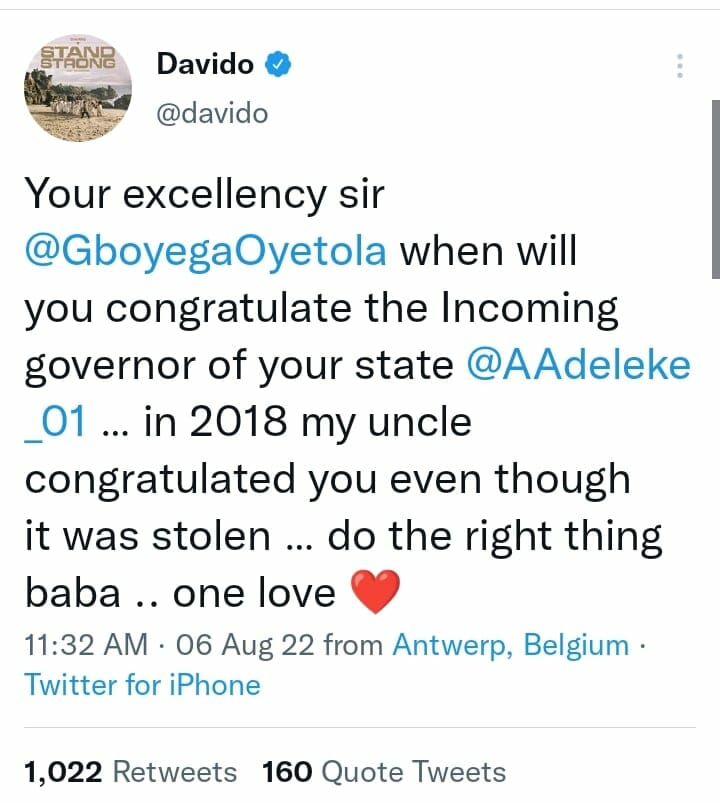