Nollywood actress Dayo Amusa has slammed her colleague Yomi Fabiyi over the controversial movie ‘Oko Iyabo’, a story linked to the sexual assault case of Baba Ijesha and daughter of comedienne Princess Damilola.

In a post shared on Instagram, Dayo Amusa said that Yomi Fabiyi has proved how incentivized he is to the rape case by producing such a movie and the audacity to send her the movie link on Whatsapp.

Dayo Amusa said she often does not judge people because every individual sees things and reacts to a situation differently.

However, it makes no sense for someone’s pain and tribulation to be turned into something of mockery, adding that TAMPAN, Censors Board and the court of law shouldn’t shy away from the issue.

READ ALSO:  ‘No jokes, I am too fine’ – Actress, Toyin Abraham brags

You just proved how much of a shame and insensitive you are Actress Dayo Amusa blasts Yomi Fabiyi over movie..

She wrote: In as much as I choose not to speak openly about the ongoings but there are issues one must not keep quiet on. Seeing a video of a movie by Yomi Fabiyi today has proved how much of a shame and insensitive he is. You even had the effrontery to share the movie link with me on WhatsApp.

I don’t judge people as I believe we all see things and react to situations differently but Under no circumstances should someone’s pain and tribulation be turned into a thing of mockery. Yomi just proved how much he lacks empathy. To what extent if I may ask, TAMPAN, Censors Boards and the court of law shouldn’t shy away from this. Ilu ti o sofin ni ko si ese. Anje ekuru ko tan! I am disappointed. LETS BE GUIDED O.

Naijabulletin recalls that TAMPAN, in a statement, condemns Yomi Fabiyi’s new movie, ‘Oko Iyabo’ and summoned him, stating the actor’s invitation became necessary because of the controversy the film has generated against their ethics and virtue. 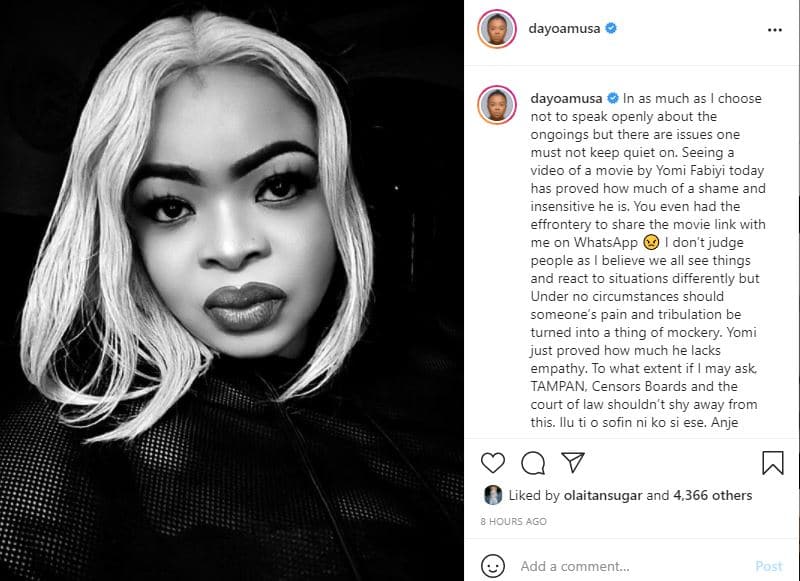 You just proved how much of a shame and insensitive you are Actress Dayo Amusa blasts Yomi Fabiyi over movie..