‘You took the ugliness from your father’s village’,Bovi’s wife to her daughter during a hilarious argument › Naijabulletin
BREAKING
Published on: September 29, 2021

You took the ugliness from your father village Bovi wife to her daughter during a hilarious argument..

Kris Asimonye Ugboma, wife of the famous Comedian, Bovi Ugboma has informed her daughter, Uyoyo Ugboma, she got her ugliness from her father’s village during a heated conversation.

The whole thing started when Kris called Uyoyo out for her looks, and she insisted that half of her mother’s beauty was transferred to her while she was given birth to, which literally means her mother is also ugly.

Taking to Instagram, Bovi judged both sides and described his daughter as being a cruise master and smart for stating the obvious and giving a heavy comeback to her mother.

Who needs a lawyer when you have a heir? Setting the records straight. Meanwhile she didn’t tell one lie! 😩😩😩. @uyoyogram is cruise control. @krisasimonye is a hater 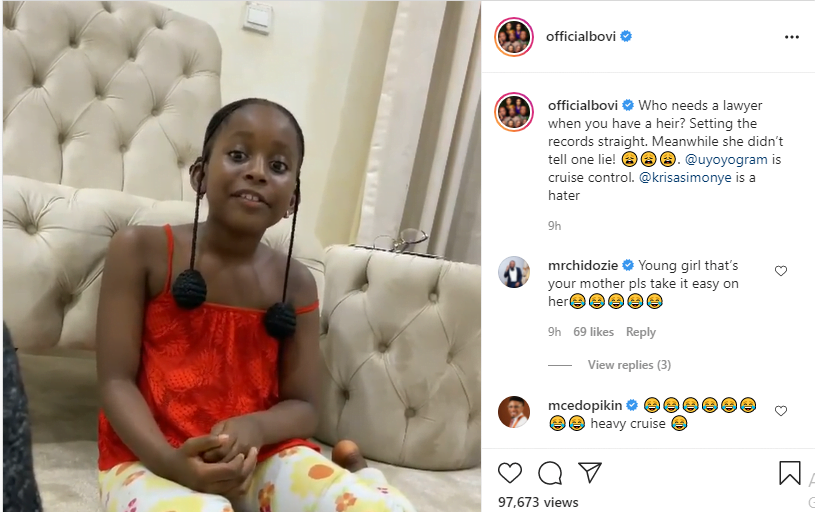 You took the ugliness from your father village Bovi wife to her daughter during a hilarious argument..

‘Daddy, please take it back’, Comedian Bovi’s daughter cries uncontrollably, pleads with her dad to reconsider his unruly judgement