Rapper AKA has seemingly come out in support of the Kagiso community who took action against a group of illegal miners, called “zama zamas”. 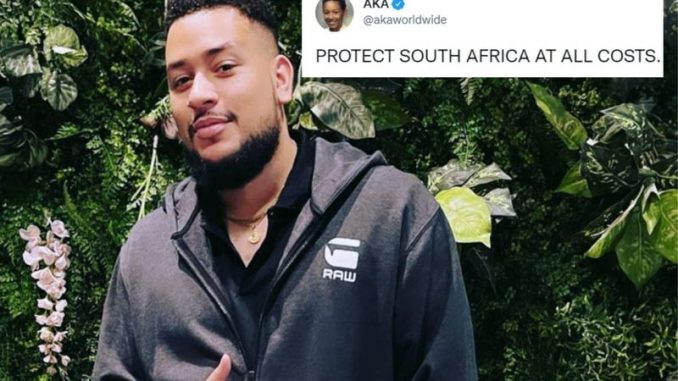 The illegal immigrants are from neighbouring African countries.

This follow’s last week’s shocking attack when a group of eight women were gang-raped by allegedly more than 80 illegal immigrants in the Krugersdorp area.

AKA REACTS TO ZAMA-ZAMA DRAMA

Following the drama surrounding zama zamas being captured, beaten, and arrested, AKA took to his Twitter to share several controversial posts.

Seemingly defending the Kagiso community, he tweeted: “Wanting South Africa to have a secure border doesn’t make you xenophobic“.

He added: “PROTECT SOUTH AFRICA AT ALL COSTS”.

PROTECT SOUTH AFRICA AT ALL COSTS.

It’s not AKA has spoken out on illegal immigrants in SA. In 2019,  AKA courted controversy after he and Nigerian rapper Burna Boy went head to head over a spate of xenophobic attacks in SA.

Following his outspoken posts, which kickstarted a debate on where African countries should have borders, many followers called out AKA as “xenophobic”.

See what tweeps had to say:

@JamboTar: “Germany, Netherlands, & Belgium don’t have borders, to travel from a European country to another European doesn’t require a VISA!! Why Africans should disunite, but other races are united? We are an insult on this planet of God!”

@ilpatlonewolf: “Why are there even borders in neighboring African countries to begin with? We should Be one African continent”

@Chinyere_hope_: “No one asked. King of xenophobia”

@MtwanaXabiso: Focus on your dying career AKA”

You AKA are xenophobic https://t.co/HQpLEvf0Gc