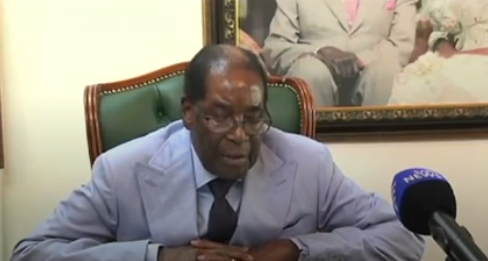 In his first interview since he was ousted, Mugabe denounced Mnangagwa’s move to oust him last year as a coup. He said his departure from office in November is a “coup d’etat” that “we must undo”.
“I say it was a coup d’etat — some people have refused to call it a coup d’etat,” Mugabe said in the interview with South African state broadcaster SABC from Harare.
“I never thought he whom I had nurtured and brought into government and whose life I worked so hard in prison to save as he was threatened with hanging, that one day he would be the man who would turn against me,” Mugabe said in the interview which was aired on Thursday.
He added: “I don’t hate Emmerson, I brought him into government. But he must be proper, he is improper where he is. Illegal. We must undo this disgrace, which we have imposed on ourselves. We don’t deserve it.”
In another interview, with Britain’s ITV News, the 94-year-old former leader said he had no desire to return to power.
He said: “I don’t want to be president, no of course. I’m now 94.”
He told both interviewers he did not hate his successor President Mnangagwa, 75, but alleged that he had “betrayed the whole nation”.
Mugabe, 94, ruled Zimbabwe from independence in 1980 until he stepped down under pressure from Mnangagwa’s allies in the army in November. Since his fall from power, Mugabe has stayed at his Harare mansion with his wife Grace. His ousting was the culmination of a power struggle between Mnangagwa and Grace Mugabe, who was being groomed by her husband as his potential successor.
Watch the interview below.
SHARE WITH FRIENDS

Read 10 Tips On How To Look Good Everyday